I covered (virtually) the 2023 Sundance Film Festival for AwardsWatch.com.

Even though I only officially reviewed three films, I saw a total of nineteen in seven days.

Here’s a brief wrap-up, sorted in order of my preference:

Hands-down the most colorful and energetic film of the festival, Polite Society is an off-the-wall, hugely entertaining film that is what you get when you mix Booksmart, Bend It Like Beckham and any Quentin Tarantino movie with Crazy Rich Asians and Get Out. It is a wicked, broad comedy, a martial arts movie, a fantasy and a teen buddy movie all rolled into one and it is so much fun. Ritu Arya plays a Pakistani-British teen who dreams of being a stuntwoman and becomes so desperate to stop the arranged marriage of her sister that she enlists the help of her friends to pull off a wedding sabotage worthy of Danny Ocean. But it’s not the plot that makes Polite Society the experience that it is (especially when it gets way too silly at the end), it’s the style, as director Nida Manzoor imbues every second of this film with infectious charm. You literally won’t stop smiling from start to finish.

Will be released April 28 in theaters

This new era of prestige television that we are lucky enough to enjoy has seen the balance of power shift from the networks to streaming services, as the most awarded, critically acclaimed, and popular shows are now found on any of the multitudes of streaming platforms, each one with their own slate of lauded original programming. Every major streamer has joined the party, even Roku hitting the critical jackpot with their highly-praised original film, Weird: The Al Yankovic Story, which premiered in November. It seems as if the only major streaming service that hasn’t jumped on the prestige TV bandwagon is Peacock, seemingly happy to bask in its vast catalog of popular shows from NBC’s archives, in addition to churning out under-the-radar original programming marked by reality series, competition shows, and formulaic sitcoms. The nominations for the 95th annual Academy Awards were announced this morning. To see the full list of nominees, click here.

–Critics and studios have much less power than they (we) think
Andrea Riseborough nabbed a shocking Best Actress nomination for the film To Leslie, the recipient of a guerrilla campaign mounted by her fellow actors. She was in a movie that has only grossed $27,000 since it debuted at SXSW Film Festival last March. As a critic whose vote is courted by studios and publicists for the two critics groups I’m a member of, I can tell you I got screeners for every film nominated except To Leslie. To Leslie, subsequently, received no major critical support or awards–no Golden Globes, no SAG, no BAFTA, nothing. BUT…Riseborough had big supporters within her branch of actors, and a few notable actors, mostly women, mounted a last-minute push to their fellow Academy members to get her a nomination. Big names such as Charlize Theron, Gwyneth Paltrow, Courtney Cox, Edward Norton, Jennifer Aniston and Minnie Driver all hosted screenings for Academy members. Then many more came out in very public support of a nomination for Riseborough, including Kate Winslet, Sarah Paulson, Jane Fonda, and Laura Dern. This groundswell, which happened just as nomination ballots were being filled in, worked, as Riseborough got the coveted nomination, without any support from the studio, box office OR critics, which is truly astounding. Out of the 27 experts who predicted the nominees on GoldDerby.com, only 2 predicted Riseborough to get a nomination. But it’s also worth noting that those same two also predicted a nomination for Danielle Deadwyler, who was snubbed. So, in the end, it’s always important to remember, no matter how much we critics think we know or think we have an influence, we really don’t. 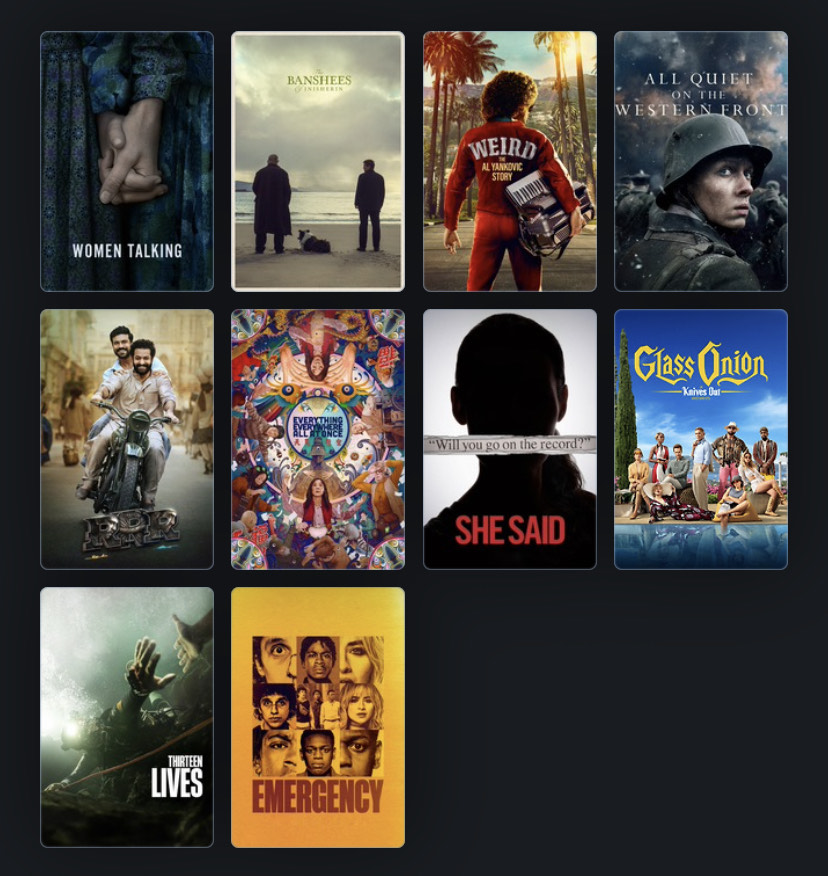 1. Women Talking
2. The Banshees of Inisherin
3. Weird: The Al Yankovic Story
4. All Quiet on the Western Front
5. RRR
6. Everything Everywhere All At Once
7. She Said
8. Glass Onion: A Knives Out Mystery
9. Thirteen Lives
10. Emergency 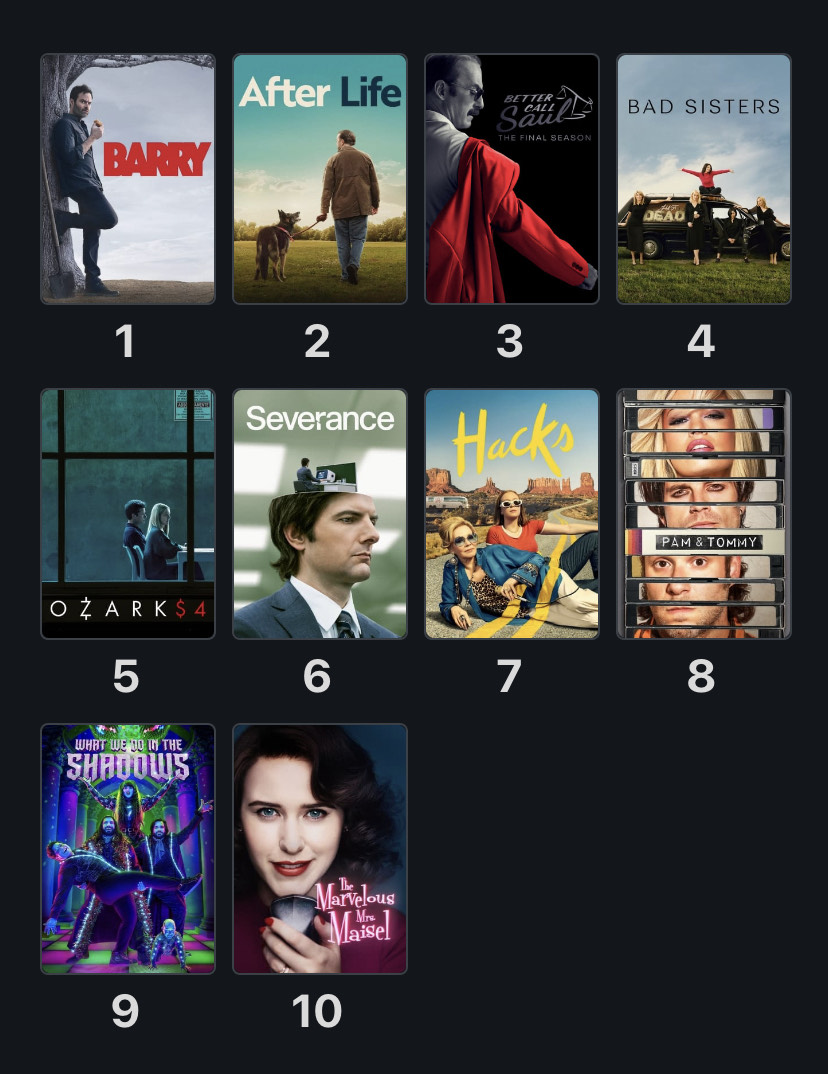 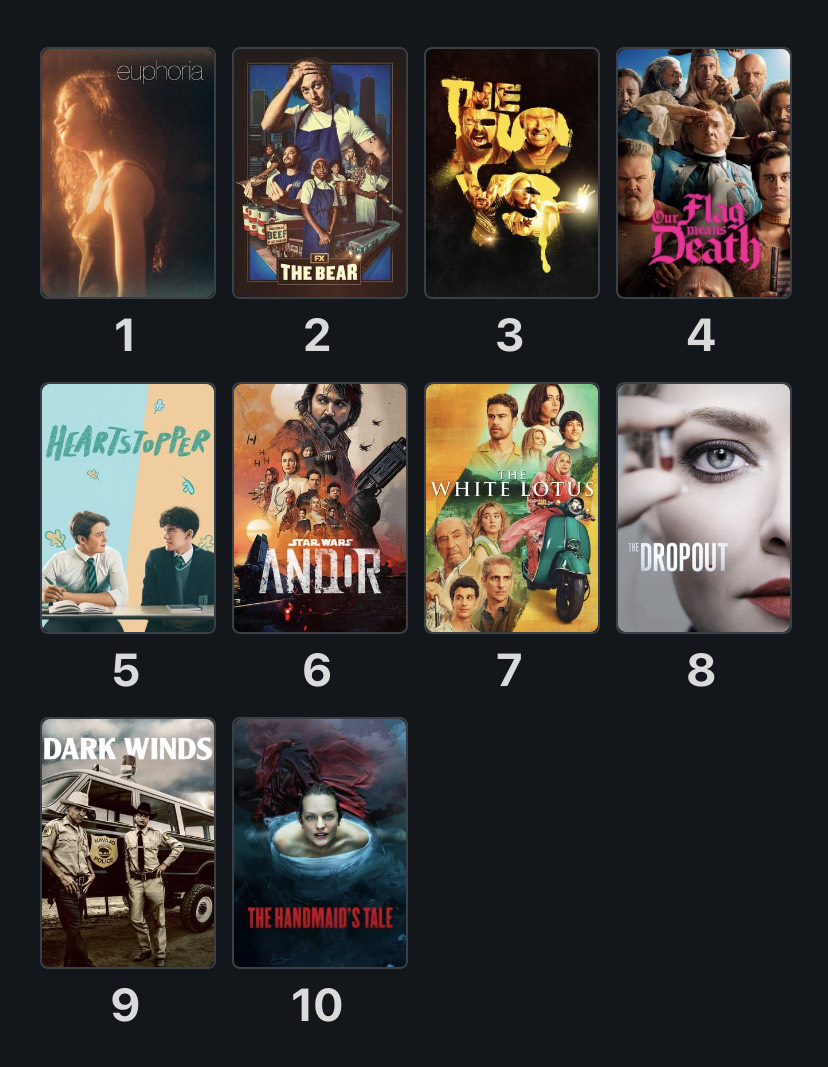 Kenneth Branagh may be getting all the credit for reviving the murder mystery genre with his remakes of Agatha Christie classics, but it’s writer/director Rian Johnson who deserves many more kudos for finding a way to not only respect the genre, but reinvent it, first with Knives Out and now, with his even more enjoyable follow-up, Glass Onion: A Knives Out Mystery. The only mystery now is how he will keep making these movies better each time.

Glass Onion: A Knives Out Mystery, finds our hero from the original Knives Out movie, famed Southern detective Benoit Blanc, played with devilish charm by Daniel Craig, on

his latest case, another featuring a gaggle of annoying rich people, all with a legitimate motive to murder the victim, eccentric billionaire Miles Bron, played by Edward Norton. Blanc finds himself invited to Bron’s exclusive island retreat, where Bron is throwing an elaborate murder mystery party for his small circle of close friends. What better way to make the party more fun than to invite the world’s greatest detective, who is assigned to figure out which of Miles’ friends follows through with killing him. It gets a little more complicated even than it sounds, but the joy in Johnson’s thoroughly engaging script is it’s easy to follow, even with all the many layers.

On paper, Empire of Light looks perfect. It’s written and directed by Oscar winner Sam Mendes, whose last film, 1917, was a masterpiece. Mendes brings a mind-boggling production team with him, including Oscar winners Roger Deakins (cinematography), Lee Smith (editing), Alexandra Byrne (costumes), and Trent Reznor and Atticus Ross (original score) and it stars Oscar winner Olivia Colman. Not only is the team astounding, but the film is an homage to the beauty of cinema and is set in a seaside English town in the early ‘80s, which both hold potential for tonal and atmospheric bliss.

Unfortunately, the sum is far less than each of its parts, and never manages to come together as a whole experience worthwhile of all the talent associated with it.

Colman plays Hilary, the middle-aged assistant manager of an aging movie theater on the English coast. Hilary leads a relatively boring and lonely life, but when a new employee, Stephen, played by Michael Ward, arrives at the theater, he opens Hilary up to a whole new world. Stephen is young and black, and shares with Hilary both the good (music) and the bad (racism) elements that shape his life and outlook on the world. Hilary and Stephen forge a friendship that turns romantic, but Stephen soon learns that Hilary is carrying much more baggage than he can handle, and the journey of their relationship becomes fraught with societal and psychological obstacles.

The first sign that the Weird Al Yankovic bio-pic was going to be unusual was when it was announced that Harry Potter himself, Daniel Radcliffe, was cast in the starring role of the titular song spoofer who found fame in the ‘80s with parodies of top pop songs. Radcliffe, who has gone to great lengths to distance himself artistically from his star-making turn as the world’s most beloved child wizard, has marked his career with a string of offbeat, indie films since the last Harry Potter film, but none quite as offbeat as Weird: The Al Yankovic Story. Radcliffe’s casting as one of the most unusual, unique and offbeat entertainers of the late twentieth century set Twitter ablaze back

when it was announced, most people agreeing that there was no way the stiff Radcliffe had either the acting chops nor the comedic skills to pull it off. And yet, here we are, and whaddya know…Radcliffe is not only great as Weird Al, but his casting looks to have been just the first brilliant decision made by director Eric Appel, who also produced and co-wrote Weird, along with Al Yankovic himself.

Weird: The Al Yankovic Story is as gloriously silly as Yankovic himself, who plays a small role as, aptly enough, a buttoned-up music exec. The screenplay is inventive and fresh, spoofing the bio-pic genre, taking a page from Weird Al himself, in ways that are not only clever and unpredictable, but side-splittingly hilarious and, yes, really really weird.

Women Talking is the kind of intense, artsy movie that only comes around during Oscar season, but I don’t want to imagine a world without movies like this. Writer/director Sarah Polley (Take This Waltz) gathers together a powerhouse ensemble of actors to, basically, sit in a room and, yes, talk, but it turns out to be the most surprising and hauntingly compelling film of the year.

Rooney Mara (Carol), Claire Foy (The Crown) and Jessie Buckley (The Lost Daughter) star in this film that is set inside an isolated religious community in 2010, but it may as well be 1810 for the way the community eschews all matter of modern conveniences. This Amish-style religion is wholly self-dependent and lives by archaic rules, notably regarding the rights—or lack of—of women. It is a way of life that is wholly and gladly accepted by all members of the sect. But when a series of savage attacks occur within the tight-knit group, all against women and all committed by male members of the group, the senior women of the community gather together to discuss what, if anything, the women should do to protect themselves.