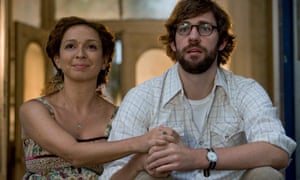 OK kids, time to put on the Coldplay and get in touch with your sensitive side. Emo rock is all the rage now (don’t ask me what it is, I only report the facts), non-threatening Zac Efron and the Jonas Brothers are who the tween girls adore and don’t ask me what anyone finds sexy about John Mayer, but apparently lots of women do. And it seems that every time I turn on Ellen’s talk show, there’s another incredibly famous movie star going on and on about being a new father and he’s turned into a giant ball of goo. Yes, America, it seems we have found our softer, more sensitive and emotional side and we are not afraid to show it.

Well, maybe this is a reflection of the times we’re living in. Things are uncertain, so we cling to the things and people we love and we try to make the most of the things we have. Yet, on the flipside, these times make it all too easy to look into the abyss and make us question our existence, where we’ve been and where we’re going and what it all means. And for those who are sensitive, these questions can be consuming and can sometimes be overwhelming. And the thought of bringing a new life into this world must be doubly overwhelming, when you are so unsure of it yourself—-or so you would think for our two soon-to-be parents who are the main characters of the new Sam Mendes film, Away We Go. However, these two soon-to-be parents find a way to look into the abyss while holding onto their optimism and love of life and, more important than that, their love for each other, to create a grounded, realistic and ultra-sensitive launching pad for the little life they are about to welcome. Too bad the film isn’t as well-rounded as their intentions.

Away We Go is exactly what I was expecting Juno to be two years ago. And everything that’s wrong with Away We Go explains why Juno is so great. Juno was completely unexpected, from dialogue to character choices to plot turns to final destinations to character arcs, whereas Away We Go colors by numbers and does everything that’s expected of it. If you are expecting a standard thirty-something indie movie, you’ve come to the right place. Away We Go is harmless, it’s cute, it tries really hard to say something, as it tells the story of a young couple who are traveling around looking for a place to settle down and live so they can raise their new baby and establish their home. They are scared, as every set of new parents I imagine are, and wondering what kind of parents they will be. So, as the screenwriters (Dave Eggers & Vendela Vida, married themselves) craft a quite unimaginative journey for them through a series of “what if” scenarios to test their parental mettle, we watch these two travel their own emotional journey, one I imagine every new or recently new parent can relate to. That would all be fine if we haven’t all seen it a million times before and we didn’t all know exactly where it was going and how it was going to end.

But, thankfully, it doesn’t really matter. What makes Away We Go so watchable isn’t the plot or the story, it’s the characters. John Krasinski and Maya Rudolph are unexpectedly well-cast as the soon-to-be parents and I so enjoyed spending time with them that I didn’t want the movie to end. Unlike other screen couples, you actually believe that these two are married and that they genuinely like each other. What feels the most real here is the way they relate to each other. You can tell a married couple wrote the screenplay because this relationship is the one part of the film that feels the most honest and unforced. And Krasinski and Rudolph are each so relaxed and seem so comfortable with each other, it’s really nice to see. I’m a fan of each of them, especially Rudolph, and it’s nice to see her come into her own in a semi-dramatic role.

But Away We Go is a comedy and, like a Christopher Guest movie, even ones that don’t work, it’s the ensemble that steals the show, and the supporting characters steal their scenes in Away We Go as well. Of course whenever you have Catherine O’Hara or Allison Janney, you know you’ve got two of the finest character actresses in your midst. And they don’t disappoint. I have come to accept there isn’t anything Allison Janney can’t do.

Even Maggie Gyllenhaal bounces back from a truly embarrassing performance in The Dark Knight and delivers a surprisingly hilarious performance here as a mother who engages in “alternative” parenting techniques. For an actress who has bonafide dramatic indie cred, it’s really cool to see Gyllenhaal stretch herself with this goofy and almost self-mocking performance.

Director Sam Mendes won Best Director (and Best Picture) for his directorial debut (American Beauty in 1999). He has only made 3 films since then, Road to Perdition, Jarhead and Revolutionary Road, all three major studio releases starring major A-list stars. It seems somewhat bizarre for such a hot, A-list director to be making a small independent film written by two first-time screenwriters starring two television actors while at the peak of his career. Whatever the reason he chose to make Away We Go, it’s disappointing that the film itself doesn’t make more of the chemistry it has in its two leads and the terrific ensemble it has surrounding them. Sometimes when you look into the abyss, there just isn’t anything there.