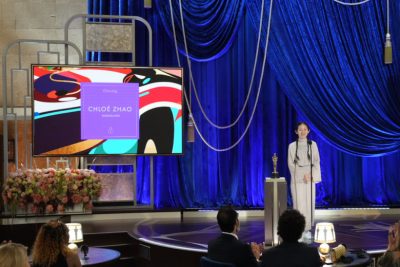 Well, that was painful.

We all knew the COVID Oscars were going to be different, we just had no idea they’d be SO different. I had no problem with the change of venue from the Dolby Theater to Union Station, in fact, I was excited at the prospect of the ceremony highlighting an L.A. landmark. Like Las Vegas and Washington, D.C., Los Angeles is an industry town, and it’s nice when the industry can find ways to salute its hometown.

I liked the casual feel of it at the beginning, the pre-show felt like a poolside cocktail party and I enjoyed the more relaxed conversations that the hosts had with the nominees and stars, it played so much better than the stressed-out red carpet. Even though I was initially upset that the five Best Song nominees were pushed off of the main telecast, their performances during the pre-show were entertaining. The performance of “Husavik,” actually done from the real town in Iceland, featuring a chorus of local children, was an early highlight for me, and I was excited to see what more surprises were to come.

As the show officially started and I saw the great Regina King pick up that Oscar and begin her stride from the outside lounge to the inside stage where the ceremony was to be held, as a colorful title sequence announced the start of the show and listed the presenters as cast members, I remembered that show co-producer Steven Soderbergh had promised a show that would feel very movie-like. So far, so good!

But then it all went downhill SO FAST.

I understand that the Oscars couldn’t do their usual big production number to open the show, and they didn’t even have a host, so there went any hope of an opening comedy bit, but what was keeping them from showing a video montage of the movies from the past year? The Oscars have every resource available to them and they are the kings of movie montages, but no montage? The industry is coming off its worst year, economically-speaking, in maybe ever, one where average Americans may have forgotten about movies altogether, what better chance would they have had to highlight, in one slick, exciting package, all the films that came out last year, including and especially the movies honored that night? There were so many good movies, remind everyone what they have been missing! I’ve always loved the Oscars because they are a celebration of film, and the montages have always been my favorite parts. But no montage. Just right into the first award, which was Best Original Screenplay, which went, as expected to Emerald Fennell, who wrote, produced and directed Promising Young Woman.

It was during Fennell’s speech that I realized that the producers were not cutting off speeches. There was no band, only a DJ, so maybe it was too awkward to put that on one single guy, but nobody got played off. So, once the first winner had a chance to finish their first thought and then continue to start and finish their third, fourth and fifth thoughts with no one to stop them, winners who followed naturally were going to follow suit. I mean, wouldn’t you? You’ve just reached the pinnacle of your profession, after years of hard work, and you’ve been recognized by your peers, and it may be your only chance to be able to thank people on such a grand stage and moment. If you were allowed to say what you wanted and thank everyone, wouldn’t you?
While I am all for these incredibly deserving and talented artists enjoying and making the most of their moments, there’s something that someone seemed to forget: they were on TV. And, to be brutally honest, the vast majority of average Americans (and the rest of the world) who were tuning in for the show had no idea who these writers, directors, editors and designers are. And when their speeches went on and on, I could hear all the channels changing across the country. Even in my living room, where I gathered with a small group of fully-vaccinated Oscar/movie die-hards, the words “interminable,” “terrible,” and “painful” were regrettably uttered. But it’s the truth: the speeches went on way too long. They may have played well in the room, but it was devastating for everyone at home. It’s hard enough to get average folks to listen to 45 seconds of a speech by anyone who isn’t a movie star, let alone 3 and a half minutes.

Also, think back to the best Oscar speeches you can remember. They were excited, hurried, panicked and brief, right?! That’s where the moments you remember happen, when someone is thrust onstage at the biggest moment of their life and they are given 45 seconds to thank everyone they’ve ever known. It’s terrifying and exciting all at the same time and we, the viewers, love it. It speeds the show along and it is fun. With no cutoff or obvious time limit for the speeches last night, it put the show in a safe zone, where everything felt like it was in slow-motion, with no stakes and no reason to panic. Nice for them, torture for us.

Then, about halfway through the show, I noticed something else: there were very few clips. Some categories featured clips of the nominees, most didn’t. Instead, they decided they would have each presenter tell a little about each nominee’s personal life story. That’s what we needed last night, MORE talking. I know what they were going for, but it didn’t work. Film is still a visual medium, we needed MANY more visuals.

And then there was the ending. Breaking all kinds of tradition, Best Picture was not the last award of the night. It’s absurd that it wasn’t, but it was clear to everyone that they were choosing to instead build to the drama of the final two awards, Best Actress and Best Actor. Best Actress was the biggest race of the night, so it was fun to hold onto that drama, but they chose to hand out Best Actor as the last award of the night, which was clear to everyone meant the Oscar producers were hoping and expecting the award to go to the late Chadwick Boseman, which would have ended the evening on an incredibly emotional and moving note. But their gamble didn’t work, as not only did Anthony Hopkins win, but he wasn’t even there. The show ended so abruptly after that that, according to reports, the show didn’t even cut to Hopkin’s co-star Olivia Colman (who was live in London), who was planning on accepting the award for him. As a result, everyone in the room and at home was left stunned, trying to process what had just happened. Did they really just re-structure the whole show to manufacture a moment for Chadwick Boseman that didn’t materialize?

As a result, Hopkins was blamed for not being there, and even for winning, even though the man is 83, was in Wales, and gave the performance of his career. Yes, Boseman’s performance was exceptional as well, but it doesn’t mean Hopkins’s should be diminished. It just made the whole sour show end on the bitterest taste, bringing the curtain down on the most sedate, awkward, boring and unmemorable Oscar show I have ever seen. The longest Oscar season ever was finally put to rest, and the rest of us were put to sleep. 2020 found one last way to ruin something we all love. Bring on 2021…not a moment too soon. 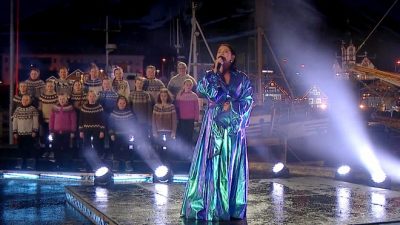 My favorite moment of the night: The performance of Best Song nominee “Husavik” (from Eurovision Song Contest: The Story of Fire Saga), which was done in the actual small Icelandic town. Gorgeous and authentic.

My least favorite moment: A TIE: The In Memoriam segment, which was sped up and slowed down according to the tempo of the upbeat song that played under it and the completely manufactured moment where we are supposed to believe Glenn Close knows “Da Butt” and hadn’t been prepped to dance.

My favorite win of the night: Frances McDormand (both)