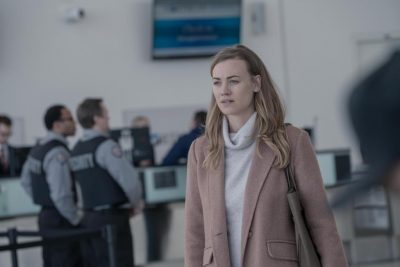 The fourth season of Hulu’s critically-acclaimed dystopian drama series, The Handmaid’s Tale, which is currently streaming, presents significant new circumstances for most of the main characters, including Serena Joy, the brutally cruel Gilead wife who now finds herself the one being confined and subjected to some long overdue justice. But Serena seemingly always finds a way to survive, and rumors of Serena’s downfall may have been premature, as we see her scheming continue to play out this season.

For Yvonne Strahovski, the talented Australian actress who plays Serena—and was nominated for an Emmy for the role in 2018—the character has been the challenge of a lifetime, and fans of the show can’t get enough of her sinister, sneering, vicious and passionate portrayal of the ultimate villain you love to hate. I recently had the chance to talk to Strahovski about what it’s like to inhabit Serena, whether she thinks she’s redeemable, how the cast keeps it light on set, and what scene made her feel particularly “icky.”

Catherine Springer: How would you describe Serena to someone who hasn’t seen the show?

Yvonne Strahovski: I would describe her as an incredibly wounded, insecure woman who acts with venom, brutality, and makes choices that are not beneficial to humanity. [laughs]

It’s interesting that you say that, because doesn’t she have noble beliefs, and wants to be an agent of change in the world for the good of humanity?

I think she used to be an agent for humanity. I think that was definitely part of her original motivation in life, in general, I think she definitely did want that, but I think everything that she’s experienced in Gilead and how she herself is, you know, her voice as a woman has been discarded and taken away from her. I think the priority now is to just save yourself, really. Which acts out in terrible choices, which are really selfish choices, just for her own survival in this world, like all the characters in Gilead.

And in season four, she makes some specific choices. What is her motivation now, is it still all about Nichole?

I think it’s all about herself and the baby that she’s carrying, that’s it. I don’t think she cares one bit about Fred, and where he ends up, although I think it still pains her and I think there’s a huge emotional scar there, and there will probably always be one, but I just think it really is about her and the baby, and how she can make the best of her situation and get out of it in the best way possible.

Oh man…I mean, it would take a lot to make her redeemable, at this point, I don’t know, I don’t think so. I’m not sure what massive act of kindness or change could do that, maybe she should become a nun or something. [laughs] And that would maybe do something, I don’t know. Maybe if she gave up her entire life to do something for the good of humanity, then perhaps.

No, I don’t think she thinks she’s a terrible person but I think she knows she’s done terrible things. But I think she justifies them constantly because of her own personal circumstances within Gilead and how she is in survival mode–it’s a selfish survival mode, it’s not for the greater good of others, she doesn’t do acts of kindness, like get however many kids on an airplane and get them out. She doesn’t do that. It’s all for her own sake.

Has she always been like that or was there a moment where it changed for her?

I don’t think it was like one overnight thing, I think it’s just been gradual. If you picture bricks being built one on top of the other and having this huge brick wall built up in front of her, I think that’s kind of what’s been happening, as her husband’s turned his back on her, intimately and also intellectually, and in terms of loyalty as well. There are so many things and each action of betrayal from her husband I think especially has built up this huge wall. And it’s really a big self-protection mechanism in a lot of ways.

Is it fun to play her?

It’s really fun to play her. I feel like I’m so lucky to have the gift of this amazing writing, and to be able to play opposite amazing actors, and get to explore this character. There are so many possibilities. I love exploring the darkest corners of her brain and her heart and what that means for her and how things play out for her. I kind of see it as if I’m walking a knife’s edge with her, because it’s not really black and white, you know, it never really is, there’s always complexities there, and I love figuring out where it is that she really sits in each scene, and how to explore it–I could bang on about this forever [laughs], but it really is an amazing character to play and yes, it is fun.

Do you love those big fiery confrontational scenes that Serena has with June? Especially the one at the Lincoln Memorial in season three, Elisabeth Moss has spoken about how memorable that was for everyone on set that day.

That scene was definitely memorable, I mean just the location itself was extraordinary. It was a privilege to be there. It felt very icky, for lack of a better word, to be wearing the teal there, in what my character and that teal dress represents. So it was very mixed for me on the day, just personally. But as far as those scenes go, I mean, they’re so much fun. We know our characters inside and out and back to front at this point, and just to be able to play with someone who is equally invested in their role and equally invested in the craft of playing. It’s so freeing when you get to work with actors who really know how to explore themselves and want to take the risks and want to try new things, and I think that’s one of my favorite things about working with Elisabeth because I think we both love going to those places, we both want to explore, we both want to find the thing that no one’s seen in the scene yet. We both want to make it unique and unexpected, while still remaining incredibly truthful to the characters in the moment and the circumstances. So, yeah, I mean, I hope that answers your question. I’m very, very passionate about those scenes, they’re so fun.

This whole show is very dark, very heavy, violent and cruel. As an actor, what sort of ramp up do you have to do to prepare and what sort of ramp down do you need to let go of it when you’re done with an especially horrific scene?

To be honest, I think I’ve sort of gotten off the easy this season, in terms of those scenes. But when you asked that question, I think straight back to that scene where June’s raped, and Serena held her down and I think that was probably the worst scene, out of the entire thing. I mean there’s been many really bad ones, but that was the worst one, and definitely felt horrible. I remember thinking, this is just horrible. And I’ve said it before, but as an actress, you don’t really expect to play the role of the rapist. You might expect that as a male actor, because typically, that is what is portrayed, but you don’t really see this angle of it, and that was really confronting. Having said that, there’s a great vibe on set. I know that sounds really ironic and kind of contradictory but we all have a good laugh, and we get along. And it’s just lovely when everybody is equally invested in creating these quality characters in this quality show.

Who’s the one on the set who keeps it lightest?

I think everyone plays their part in keeping it light on set. We laugh with everybody, really.

Is there a practical joker in the group?

No, I don’t think there’s like a practical joker, because we do spend a lot of time together. I mean certainly I spend a lot of time with Joseph [Fiennes] and Elisabeth, maybe not so much this season, but especially with Joe, we’ve come to know each other really well. But there’s some people I’ve never worked with, like, Alexis [Bledel]. She might be the only one at this point. I’ve certainly not worked much with other people, like Samira [Wiley] and I have only ever had one scene together and Maddie [Brewer] and I probably only had a couple, and nothing ever directly to do with one another, so there’s this element of when we do get to see the people that we never get to see on set, it’s exhilarating and certainly I noticed a lot of that this season, you know, as people are watching this show, we’re going down paths that, I think fans of the show are going to be really excited to walk down with us because it’s new, and probably things that people have been wanting to see for a while.

This interview has been edited for clarity and content.