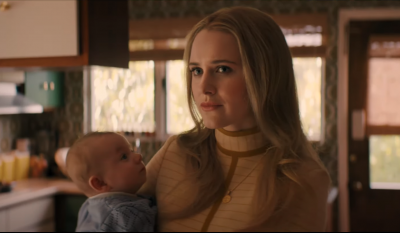 Hollywood, despite its recent struggles, still remains at the forefront of the movement to push through more opportunities for women and minorities. With that push comes more chances to explore different perspectives on some of the same stories and histories that have previously been seen only through the white, male lens. One of the most popular genres traditionally told through a male perspective is the mob crime drama. Arguably the most popular film of all time, The Godfather, and the most popular television series of all time, The Sopranos, both mob stories, were strictly from the male protagonist’s perspective. But in writer/director Julia Hart’s new film, I’m Your Woman, which premiered as the opening film of the annual AFI Fest, she and co-writer Jordan Horowitz put a fresh spin on the mob movie, telling the story from the normally put-upon mob wife’s perspective.

Rachel Brosnahan stars as Jean, a young wife in the ‘70s who, via voiceover narration, informs the audience that she and her husband never had children,

despite always wanting them. Jean’s husband, Eddie, played by Bill Heck, works at night and often for long hours, leaving Jean mostly alone. It’s not clear what Eddie’s occupation is, but when he comes home one day with a baby, saying he’s “worked it all out,” so she can now be a mother, Jean doesn’t ask questions. She learns how to be a mother, even though it’s clear that motherhood—and general housewife tasks—are not her strong suit. When Eddie doesn’t come home one night, his “friends” arrive at the house and whisk Jean and the baby away, saying it’s not safe there. Jean is driven to a safe house by Cal (Arinzé Kene), who tells Jean that Eddie has killed someone and he needs to keep her safe. It’s not until this moment that we—and maybe even Jean—are sure that Eddie is, in fact, a gangster. Cal warns Jean to not speak to anyone and to wait for him to return when things are safer. Jean is initially compliant, but she eventually breaks Cal’s rules and disaster ensues. She is forced to go on the run again, but, this time, she’s not content to just sit back and wait.

Hart and Horowitz’s screenplay puts a nice twist on the regular mob drama. The flipping the view so you’re looking at a scenario we are so familiar with from the other side is fascinating. Because they have taken a genre that we know so well, we can picture in our heads exactly what has happened out of view. We’ve seen mob hits a million times, and the fallout from them. But I’m Your Woman tells the story of the collateral damage of those hits—the people who are always the ones threatened but whose stories are never told. This is Carmela’s story from The Sopranos, or Kay’s from The Godfather. These are characters we want to know and we want to see react to the circumstances of their lives.

The problem is, I couldn’t stop imagining how much more interesting Carmela or Kay would have been than Jean. Brosnahan plays her as an even-keeled, unquestioning, almost uninterested party to her own life. While I appreciated the fact that she doesn’t go over-the-top and overplay Jean as a crazy Jersey mob wife, ala Jennifer Lawrence in American Hustle, I would have liked just a little more life to her. Her facial expression hardly changes at all throughout the film and we never have any understanding of her motivations, other than to protect her baby.

And then there’s the baby. One thing that never happened in The Godfather was the baby stealing the show. The baby in this movie absolutely is the best thing in I’m Your Woman. That’s really not a dig on the movie, it’s just an admission of how distracted I was by him. But, again, this is another element of I’m Your Woman that is different. This movie is a mob movie with a definite soul and heart. It’s easy to say, but not easy to achieve. Changing the perspective, changing the protagonist makes all the difference.

Hart and Horowitz infuse this story with depth and an actual story, which, for the most part, is engrossing and unpredictable. There are twists that are clever and there is genuine action that is exciting. Brosnahan’s supporting cast is excellent all around, especially Kene and Marsha Stephanie Blake, who plays Cal’s wife and helps Jean escape.

But the effect of the film, as a whole, is ultimately disappointing, mainly due to the lack of connection we have with Jean. While Brosnahan does disappear into the role—a big feat, considering her role as the beloved Midge Maisel in Amazon’s popular and Emmy-winning hit The Marvelous Mrs. Maisel—she does not rise to what’s needed to carry this movie. The pace is at times quite painful, mainly due to a lack of clear focus as to who Jean is and what she’s about. She seems to be sleepwalking through her own life, never questioning anything, even when things get crazy. Hart’s ponderous direction amplifies Jean’s lack of energy and ownership. While I do appreciate the more thoughtful and feminine approach to the mob crime drama, I just was wishing for a little more life in it.