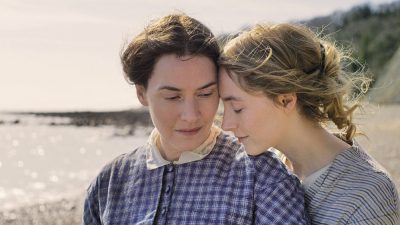 The movie industry is starting to heed the call for more stories told from diverse perspectives, by diverse voices. History books were written by white men, so that’s generally the history we’ve been told, and, up until recently, it’s the only history that movies have been telling. The tide is starting to change, though, as we are seeing more movies about the people who have been in the shadows, whose contributions to history were overlooked or flat-out ignored, simply because of their gender or color.

Writer/director Francis Lee found just such a story as he was looking on the internet for a birthday gift for his fossil-loving boyfriend. As he continued to

do a deep dive into the history of fossils (pun intended), he came across one of the most acclaimed fossil hunters of the 19th century, a person who was overlooked and underappreciated simply because she was a woman. Her name was Mary Anning, and Lee knew he wanted to tell her story. The result is a new movie called Ammonite, starring Kate Winslet as Anning, and Saoirse Ronan as her friend and lover.

Ammonite is set on the harsh, unforgiving and cold English coastline of Lyme Regis in the 1840s. Anning works alone, walking the beach, searching for small fossils which she can dig up and sell to tourists from her tiny shop in town. Because she’s a woman, she is not taken seriously in her field, even though she has made some substantial discoveries, ones that were claimed and made famous by her male colleagues. So Mary is left to sell trinkets to tourists, while taking care of her mother and nursing some serious resentments toward life.

When Mary is asked to look after a young wife of a patron while she is convalescing from an illness, Mary feels she has no choice but to acquiesce. The young woman, Charlotte, is upper class and has seemingly led a sheltered life, quite a contrast to Mary’s digging-in-the-dirt, angry existence. As Charlotte becomes impressed by Mary’s knowledge and discipline to her craft, and herself wanting to be defined by more than her station in life, she asks if she can serve as Mary’s apprentice. Initially reluctant, Mary agrees and the two begin to work together. Their relationship begins to blossom into more than co-workers as they grow closer and eventually become lovers. They fall in love and embark on a passionate romance. When Charlotte’s husband returns to collect her, Charlotte and Mary are forced to make a difficult choice.

The obvious draw in this movie is the casting of Kate Winslet and Saoirse Ronan. The two actresses are world-class, Winslet with an Oscar already for The Reader and Ronan due to inevitably get one, after having already been nominated four times by the age of 25. The lure of seeing these two relate to each other in an intimate way is quite appealing, as was the casting of Cate Blanchett and Rooney Mara in 2015’s Carol, directed by Todd Haynes. Like Carol, Ammonite features a younger woman who falls almost under a spell of an older woman whose life experience causes almost as much turbulence as life itself. In Ammonite, Winslet is astounding as Anning, playing her as a reserved and resentful woman who is burning inside. Winslet casts aside her A-list elegance and becomes Mary Anning—dirty, cold, unloved, overlooked. Ronan’s Charlotte is strong as well, but Ammonite belongs to Winslet, in all her sorrow and unspoken heartache.

Lee’s naturalistic lighting sets the perfect tone for a 19th century love story set against the turbulent backdrop of crashing waves and a brutally cold coastal wind. Everything here is designed to put you right there, it feels as it looks, dirty, cold and wet, and, conversely, you can feel the intensity of the passion when it erupts. Unfortunately, though, the film’s pace is just a bit too tedious and the relationship not quite substantially built up enough for me. I wanted to become emotionally invested, but it never quite developed. It’s impossible to not compare this film to last year’s Portrait of a Lady on Fire, and, unfortunately, Ammonite falls short, despite a deeply resonant performance by Kate Winslet.