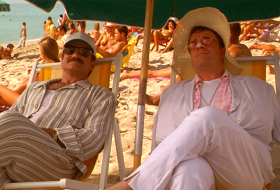 Looking for some movies to watch while you are stuck at home, away from friends and family? Well, fear not, I’ve got the ultimate list of movies that are guaranteed to NOT get you down. These are the movies I turn to when I want to escape from any negativity or sadness, along with where you can find them streaming or on demand now.

What you won’t get in any of these movies: death, violence, sorrow, tragedy or anything depressing.

What you WILL get in each of these movies: sheer joy.

All of these can be rented or purchased for as little as $2.99 from many streaming services, including Amazon Prime Video, iTunes, YouTube, GooglePlay, and VUDU. I’ve noted by each movie if it is available anywhere for free (or included for free in a streaming subscription).

In alphabetical order (even though we all know Tootsie is #1):