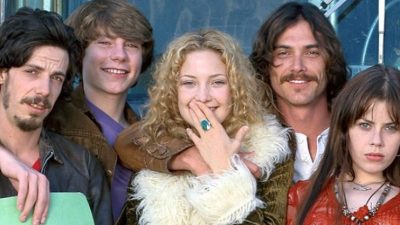 It’s hard to believe that it’s already been 20 years since Almost Famous came out. A critical success but a commercial failure, it was nevertheless a touchstone for two generations. It has stood the test of time, still beloved by fans and constantly being discovered anew. Looking back at it from 2020, it’s easy to see why the film imprinted on all of us so easily and significantly. Beyond being an excellent example of filmmaking, it’s the spirit and the soul of writer/director Cameron Crowe’s personal love letter to rock ‘n roll that speaks to anyone who has ever picked up a guitar or played a record.

It would be so easy to just write the success of Almost Famous off to nostalgia, but I believe the film taps into so much more. It’s not just a snapshot of a moment in time (which happens to be arguably the best moment in time for the genre of rock and roll), but it is a deep dive into how music can reach the deepest recesses of our soul. Twenty years ago, this was the first paragraph of my review:

“For many people, music is a passion. Music is the thing that gets us through the bad times, reveals our intimate emotions, fuels our anger, and, too often, opens our wounds. Even film, my favorite medium, is made better by a good soundtrack. What would we be without the music that affects us? What do we owe to the artists who we listened to when we were growing up? How could we ever capture how those dark nights spent in a lonely room listening to headphones shaped our souls?”

For teenagers especially, music taps into that bittersweet spot of adolescence, when we feel ready to experience the world on our own, but lack the courage or knowledge to do so. Music, so much more than any other medium, seems to be able to expose and reveal our rawest emotions when we’re young, whether fueling our rebellion, heightening our desires, or inspiring our self-expression and awareness. Simply put, music gives us courage. For William, played with a mature and sweet innocence by Patrick Fugit, music is the key to unlocking everything in life, including sex, freedom and self-awareness. I hate the term “coming of age story” because it assumes so many things and assigns preconceived ideas onto a piece. What Crowe does in Almost Famous is tell a story of a young man’s awakening, yes, but a spiritual and emotional awakening, not just a sexual one. In fact, the lack of sex in Almost Famous feels intentional, as if Crowe is making the point that rock and roll is so much more than just sex (or drugs). It’s a gateway to self-discovery. The sex and drugs are just gravy.

But then, of course, there’s the music. Retrospective soundtracks to movies have been around as long as there have been movies. In movies like Boogie Nights, The Big Chill, Dirty Dancing and Guardians of the Galaxy, classic pop/rock songs are used to create an emotional connection between the characters and the audience, setting a tone. Martin Scorsese is famous for his use of classic ‘70s music, most notably The Rolling Stones, in his films. But what Cameron Crowe does, aided by his then-wife Nancy Wilson of Heart and Peter Frampton, who both consulted on the classic songs and wrote some new ones for the film, is use the songs not just as background, but as emotional markers in

the movie, literal cues for moments in William’s life. Elton John’s “Tiny Dancer” still takes me instantly back to the bus after Russell (Billy Crudup) leaps from a rooftop in a drugged-out haze and Penny Lane (Kate Hudson) tells William “you ARE home.” Simon & Garfunkel’s “America” is used by Anita (Zooey Deschanel) to tell her mother (Frances McDormand) why she has to leave and then plays as she says goodbye. And, of course, Stevie Wonder’s “My Cherie Amour” marks the moment William realizes how much he loves Penny, even while she’s having her stomach pumped.

Besides the music, Almost Famous is perhaps best characterized by its warmth and lack of meanness. The biggest conflict in the film is when the band fights over t-shirts or they fire their manager (to hire Jimmy Fallon, of all people). Even William’s jaded and crusty music critic mentor, Lester Bangs, played perfectly by the inimitable Philip Seymour Hoffman, comes off more as a fan who resents how much money he’s spent on records over the years, rather than a critic who laments the lack of intelligence and creativity in modern music. Crowe, who based the film on his own experiences as a teenage journalist traveling with bands like the Allman Brothers, infuses the film with an idealism borne from memory, which gives the film a glow, almost as if literally from a dream.

Crowe mixes genres so effortlessly in this film, arguably his best. Depending on the moments you drop into it, it’s all at once a comedy, a romance, a drama or even satire. Beyond the ode to music and the coming-of-age story, Crowe builds in deeper themes, like the importance of good journalism (not lost on a 2020 audience), the heartbreak of single mothers and the power of family—both the one you are born with and the one you make.

And that cast! Almost Famous is just the weirdest, most perfect casting you could imagine. The three leads of the film were either total unknowns or relative newcomers. Fugit, who carries the movie, had never acted before. Crudup, who took over for Brad Pitt after Pitt admitted he just didn’t “get” the movie, was relatively unknown with only a few credits to his name. And 21-year old Kate Hudson was best known for being Goldie Hawn’s daughter before being cast as the dreamweaver-in-curls Penny Lane. Nominated for Best Supporting Actress for this movie, Hudson plays the quintessential “manic pixie dream girl” with delicacy and joy. Her chemistry with Crudup takes the film to unexpected places. The ensemble cast that floats around them is so good too. Jason Lee, Zooey Deschanel and Anna Paquin play key supporting roles and each of them deliver the perfect energy. There are fun cameos, like Jann Wenner and Peter Frampton, but it’s the memorable and wacky one-or-two scene ‘before they were famous’ moments from Rainn Wilson, Jay Baruchel, Eric Stonestreet, Jimmy Fallon and Marc Maron that punctuate this film with genuine charm. The entire ensemble cast deliver perfectly calibrated performances that manage to toggle between the sincerity of It’s a Wonderful Life and the goofy cluelessness of This is Spinal Tap, and everything in-between.

Some of the cast reunited earlier this summer to celebrate the 20th anniversary of the film, including Kate Hudson, Patrick Fugit, Billy Crudup and writer/director Cameron Crowe. In perfect fan service, they talked about the most indelible and iconic moment in the film, the “Tiny Dancer” bus singalong, which they said took two days to film.

“The amazing thing was we committed to that song — and it was the right song — and it wasn’t even that famous a song,” Crowe said. “And you you got to love Elton John, because as soon as he saw the movie, he was like, ‘I always loved that song! You understand that song!’ And he started playing it in his show, and he’s never stopped playing it. He gives us credit for it.” 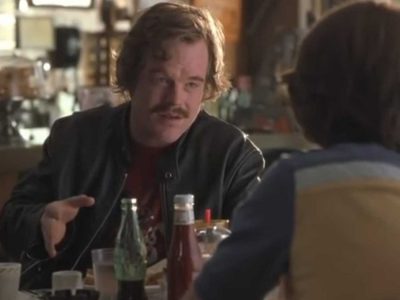 But the performances that linger are the ones from Oscar winners Hoffman and McDormand. Hoffman, who famously was sick with the flu for the entire four days he shot his few scenes, plays music critic and mentor Lester Bangs like an exposed nerve. He’s raw and reactionary, but offers words of wisdom that serve, for both William and the audience, as guideposts for the journey of the film. “We are uncool,” the words meant to embolden, not demean. Hoffman’s delivery is empathetic and strengthening. And he finds a humor beneath the cavalier gruffness that makes Lester Bangs as appealing as the actor playing him. Like the loss of the golden age of music that this movie represents, it’s hard to watch Hoffman here, because of all his roles, this one is perhaps the most beloved, the one that reminds us, most perceptibly, of what we’ve lost. 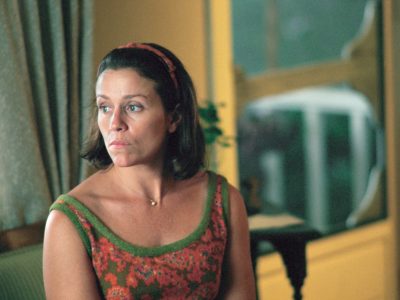 But it is Frances McDormand’s funny, fierce, frill-free and Oscar-nominated performance as William’s mother Elaine that is the glue that holds this movie together. The double Oscar winner is one of the few actors who can blend vicious and sweet into a single line delivery, and her thornish likability is on full display in this film, as is her perfect, dry comic timing. Her character is given no backstory, no storyline, no part in the plot except to serve as an ostensible foil or grounding cable for William and Anita, and yet McDormand turns every one of her scenes into heart-on-your-sleeve gold. Nobody else can do what McDormand does, blending prickliness and toughness with compassion and warmth. Watch Almost Famous again and you’ll be surprised at how important Elaine is to the movie. When you think of this movie, you think of the music, the groupies, the love triangle, Hudson’s smile. But Crowe’s magnificent, Oscar-winning screenplay lays the foundation of the film onto Elaine, so everyone else can fly. Hudson became a star because of Almost Famous, but McDormand steals the show.

Released in 2000, Almost Famous is the perfect film to have ushered in the new century. It’s a loving look back at where we came from, its warm embrace of an era that we may soon not even recognize anymore, and its heartfelt homage to home and to chasing your dreams represents a beautiful bridge between past and future. In today’s world, kids don’t sit cross-legged in front of their floor speakers anymore, excitedly absorbing every note and every word of their favorite band’s latest album, staring at the album cover, reading the lyrics printed on the sleeve, getting up to turn the album over and gently resting the needle into the grooves. Magazines hardly even exist anymore, let alone the special thrill of being on the cover of one. And when was the last time anyone gave you a phone message? This movie dares the viewer to reminisce at what has been lost, and to recall their first love, whether it was a song, a person or a feeling, and remember the innocence and hope of youth.

In the end, there are so many elements of Almost Famous that continue to stand the test of time. Movies like Bohemian Rhapsody and Rocketman owe at least a portion of their massive success to Almost Famous, the movie that was the first to make nostalgia look really cool. So, on its 20th anniversary, let’s give Almost Famous its due and remember its motto, “It’s all happening!”