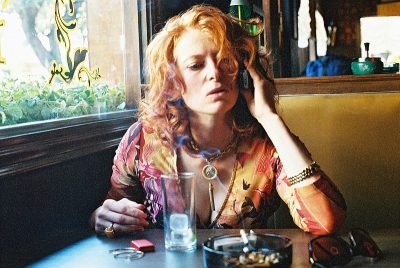 JULIA—Critics exist for a reason. If critics didn’t exist, The Hurt Locker would probably be on a shelf somewhere. It is because of the critics that The Hurt Locker, and Slumdog Millionaire, for that matter, got any attention at all, and anyone went to see them. The critics are the ones who go to see all the movies and are the ones who find the little gems (like Hurt Locker and Slumdog) and bring them to our attention when we might otherwise never know about them. And we are forever grateful. However, the critics sometimes are wrong. Very wrong. Roger Ebert went on a personal crusade to get Tilda Swinton nominated for Best Actress for a film that I had never even heard of called Julia. Now I love Tilda Swinton and I wondered “why have I not even heard of this movie?!” But he kept going on and on and on about this performance, and I love Tilda Swinton, and, most of all, I trust Roger Ebert, so I rented the movie.

There’s a reason I’ve never heard of it.

Tilda Swinton is a great actress, but she really needs to fire her agent. Julia is a terrible movie. All these reviews I’m reading about it being a great film—I’m absolutely DUMBSTRUCK. It is TERRIBLE. Julia is a movie (over two hours long, mind you) that is about a selfish drunk sex-aholic who gets caught up in a kidnapping scheme that eventually lands her in Tijuana mixed up with a Mexican gang who want to trade her kidnapping victim for money and oh god it just gets worse and worse. It is a mess. It is insulting, vulgar, offensive, stupid, pointless and ultimately a complete letdown. I kept wondering what Roger saw in it and what the other reviewers saw in it and it got me to wondering what I was missing—but then I just had to let it go. And that’s the beauty about movies. Everyone has an opinion and everyone is entitled to it. Julia just wasn’t for me. And I just have to say it probably won’t be for you, either. You can listen to Roger Ebert if you want, but, on this one, I’d go with me.