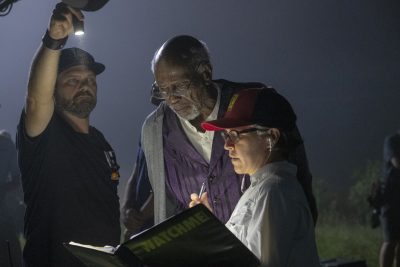 Nicole Kassell is probably the best director you’ve never heard of. If you have a favorite show on television, she probably has worked on it, from Better Call Saul, The Leftovers, Westworld, The Killing, Claws, The Closer, Rectify and The Americans, just to name some. But her DGA win this year for Outstanding Directorial Achievement in Dramatic Series was for the pilot episode of Watchmen, the critically-acclaimed and massively popular HBO series from mindbender/creator Damon Lindelof. I recently talked with Kassell about what song inspired her vision of the show, why she loves challenging an audience and how Lindelof might actually be just like the rest of us.

AwardsWatch: You’ve directed some of my all-time favorite shows, but let’s talk about Watchmen. I myself came into it with the slimmest knowledge about the Watchmen universe, having only seen the 2009 movie. How do you approach this project both to satisfy hardcore fans and attract people like me who are interested but may wonder if they would “get it?”

Nicole Kassell: Well, I think Damon really addressed that by bringing this team together. Damon is a die-hard fan, grew up on it, it’s in his DNA. And then he hired me, who had not read the book before reading his script, so I came to it with that perspective. And I know those in the writer’s room who predate me, so there was that mix as well. He put together a team of filmmakers, so those eyes were always on it. Even the creative executives from HBO would be reading drafts and giving notes. It was a mix there as well. So that that line was always being walked with both sides of the audience being represented.

So you have to focus on the story, so you can bring in those of us who are just jumping in. And if we can pick up some of the myth and the otherworldliness of the Watchman universe, that is gravy.

Obviously they are all together, but I think first and foremost, the story itself had to work for a new audience, that definitely was the priority from the beginning. It had to succeed for somebody who didn’t know the source. And for people who knew the source, there’s a whole other level of viewing, whether it’s little Easter eggs inside or a richer backstory. But, yes, this story, episodes one through nine, have to stand on their own. And they made sure to give as much from the original as essential to make sense of the new, but maybe not in real time, you know? For example, episode 8 answers so much. It was fun. As soon as I came on board I did do the deep dive into the source material, the graphic novel and the making of it, but in reading the scripts as they would come in, Damon, who writes to the reader in a wonderful way, would say, “if you’re confused don’t worry!” Because he doesn’t want to give it all up in the first episode and that’s part of what I loved so much about his storytelling. It’s a very fine line to tread, just to what degree you can keep people confused but interested and engaged— not too annoyed or distracted by the confusion. It’s mystery, and mystery needs to be revealed over time, otherwise why would people watch nine episodes.

That reminds me an awful lot of The Leftovers and Westworld, two shows you also worked on. These aren’t the kinds of shows you can have on in the background while you’re doing the dishes. What is it about challenging an audience like that that that you really love?

It’s what I like as a viewer, honestly. The shows I work on are the shows I want to watch.

We jump into the show in a very big way. The emotional centerpiece for the whole series is the Tulsa Massacre of 1921, which not only sets up the story but sets the tone. How do you prepare to put this important moment in history on screen in a narrative way to suit your story?

I wanted it to feel as raw and visceral as possible because it is a true story, it is history and we’re entering it through the eyes of a five-year-old. You know, the way early memories feel or even what it’s like now when you see something or hear something that gets branded on your mind. That was very much that sequence to me, the parents getting this boy out of there, wanting to cover his eyes and hide him from the horrible things he’s going to see, but he still sees it. I didn’t want to sugar coat it or make it feel like it’s just a movie or in the movie. I wanted to really portray it as honestly as possible.

And you really feel like you’re in it. That’s what you were going for, I assume.

You are originally from Charlottesville and have said you were shaken to your core by the 2017 white supremacist march there, and that you were looking for a way to make a statement about it. Did this provide you that opportunity?

Yeah it did, absolutely. It wasn’t to make a statement about that so specifically as to comment on, from the election 2016 to Charlottesville 2017, how the general distress over what’s happening in the country has affected so many of us. As an artist wanting to do something–what could I say in response. And this was that gift. Damon obviously created it and we talked at length about it. When I read the script and became involved, there was this a-ha moment—here’s where I get to put all of that energy that’s storming inside me, making me feel helpless.

I wish we all had that opportunity to get it out in that way. We have to talk about Regina King, the centerpiece of the show. What was the collaboration like to craft a complex character like this with her?

Well, really, it’s like any role, just meeting and talking. With this character specifically, she plays a number of roles. Who is she when she’s Angela, who is she when she is Sister Night, who is she in the classroom versus at home…. Like with any actor I’m going into a piece with, we discuss backstory and I like to really be very clear with actors on what my vision for the script is. I even show the look book I create when I come on board because I feel it makes it transparent. With the actual technical filmmaking, the more they see my passion come through, it helps them become a part of the process. But really, it’s just talking character, big picture, and then breaking it down, scene by scene. It’s also a three-way conversation, because she’s talking with Damon directly and I’m also talking to Damon directly without her. For each script, Damon would do these in-depth tone meetings, where you just go through, scene by scene, to make sure you’re in touch with the intention of that scene from the writer, and that’s essential. So it’s this kind of multi-level process.

Speaking of your vision, you had said that you wanted it to be a visual equivalent of the Queen song “Bohemian Rhapsody.” What did you mean by that?

That’s how I felt when I read the pilot. That was the overwhelming first impression I had that this IS the visual equivalent of that song, where you fly through all these different genres that, as one, should not work. If somebody described “Bohemian Rhapsody,” it would sound absurd, but it’s one of the best songs ever. I felt I had to catch my breath at the end of reading the pilot—we had just flown from a black and white movie to 1921 to an alternate universe where squid are falling, there’s the musical of Oklahoma, there’s a massacre of cattle and a shoot out. [laughs] An owl ship chase in the sky! It was all these genres—sci-fi, drama, musical—and then setting up this TV show within a TV show that was coming. The parallax world of the pod where the suspect is questioned, all these genres smashed together. It was such an exciting, complex playground to get to work on and to bring together and to hold it together, really, is committing to these moments being real and true.

And all the production aspects are just brilliant, from the cinematography to the production design and those costumes! But I was mostly struck by the score. I’m a big fan of Trent Reznor and Atticus Ross…

The tone is so important, especially as you mention it being a visceral and multi-genre experience. But there needs to be a tone throughout and I think their score is to so incredible.

I couldn’t agree more. That really is the work of those guys working with Damon. It was very cool that they started composing material based on script. So when I saw the first editor’s cut of the pilot, they already had material. And then this symbiotic relationship between cut and composer happened, but a lot of the material came from them just responding to the script.

This is the second time you’ve worked with Damon. Is working with him different?

No, I mean, honestly, I think that each person’s equally different, you know? They’re both the same and they’re different. Damon is very, very exacting and is very involved in pre-production, but he’s no more different from one human than another. His writing is extraordinary and I passionately love his writing and the worlds he creates, but he’s just another guy! He’s a really, really great and talented guy, and there are many talented people in the world. There’s no kind of secret there, he’s a wonderful human being with a huge heart and this incredible mind and he has the courage to try things that are really risky and that’s a very scary place to go, but it allows you to either hit it big or not. He’s fantastic.

Well I’ve got the keys right now, so let’s see if I can open the door. [laughs]

This interview has been edited and condensed for clarity.
This article was originally published on AwardsWatch.com.