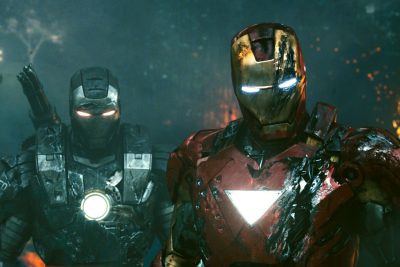 Here we go again. Summer, sequels and superheroes. I thought we had gotten off this rollercoaster with Star Trek, Up, District 9, Inglourious Basterds, and even Transformers making up the bulk of our blockbusters last summer—not a single superhero sequel in sight. But alas, the mini-vacation was not to last. The superheroes are back, and, unfortunately, not better than ever.

Iron Man was a revelation. Brash, bold, bawdy, brilliant and a breath of fresh air, Robert Downey Jr. infused the classic Marvel superhero character with a personality and charm not usually seen from our brooding, conflicted doppelgangers. The 2008 movie was fast-paced and fun, and, mainly because of Downey’s appealing and surprisingly well-measured performance, it was also fantastically entertaining. It also made a boatload of money. So, of course, they had to make a sequel. Which means they, of course, had to ruin it.

Iron Man 2 is a mess. It is a classic example of why people hate sequels. And why so few of them ever work. Any sequel that HAS worked (The Godfather II, Toy Story 2), has worked because it has stood on its own, had a story of its own, and not merely been an appendage of the original. If the sequel cannot stand on its own, on its own merits, tell its own story, then it fails. And Iron Man 2 fails. Miserably.

There is a hollow and very lame attempt here to build a story around two different villains (Mickey Rourke and Sam Rockwell) and their hatred of Tony Stark, aka Iron Man, but all it ends up playing out as is a grandiose and very loud two hours of explosions, crashes, and various other excuses to blow things up that end us up in the same place where we begin: villains lose, Tony wins and Tony is still arrogant, powerful, witty, and untouchable. Everything that happens inbetween? Pretty pointless.

In fact, this whole movie is pointless. Iron Man 2 has absolutely none of the charm and fun of the original. What was so enjoyable about the first film was all the discovery Tony/Iron Man makes about himself and his capabilities. There is none of that discovery here. Nobody is having any fun anymore, least of all the audience.

There’s a whole subplot with Samuel L. Jackson and Scarlett “No, really, I’m a serious actress” Johansson that is so blatantly contrived merely to create a scenario for yet another sequel that it would make me feel cheated if I weren’t so amused by how randomly out of place it is. Of course, in this movie, it’s hard for anything that doesn’t make sense to feel out of place.

This film is cluttered, loud, angry, unfocused and completely dispassionate. Everything the original Iron Man was not. Let this be a lesson to you, kids. This is what sequels can do: they can take something that was once vibrant, smart and refreshingly fun entertainment and turn it into just another dumbed-down summer action picture that is as forgettable as it is expensive.

And they say Hollywood can’t teach you anything.