The absurdity of war has been explored in countless ways by Hollywood, from the dark comedy of M*A*S*H to the insanity of Apocalypse Now to the violence of The Deer Hunter to the psychosis of Full Metal Jacket to the satire of Dr. Strangelove, the many angles of the lunacy of sending men into battle has been covered, and then some. So now imagine all of those movies jumbled together into one narrative piece. The result would be Catch-22, a 6-part limited series on Hulu, premiering May 17.

The mini-series, based on the classic novel by Joseph Heller, is executive produced by a team led by 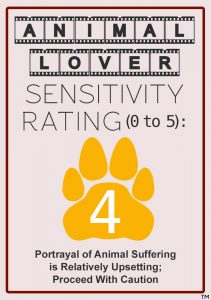 George Clooney and Grant Heslov, who won Oscars for producing Argo in 2012. Clooney and Heslov also share directing duties (and both have small roles), along with Ellen Kuras, each of them directing two installments. Writers Luke Davies and David Michod have adapted Heller’s book with precision and inspiration, as they have focused the story on World War II bombardier John Yossarian (played by Christopher Abbott) and his experiences while being stationed in Italy. Yasarian, known as Yo Yo to his buddies, is all about finding a way out of the war. But he soon comes to realize that he is simply a cog in the giant war machine that is unforgiving, relentless, heartless and cruel. Sanity is a precious commodity in war and we watch as Yo Yo desperately tries to hold onto his through a multitude of encounters, actions and circumstances that range from the absurd to the tragic.

The title refers to the situation that Yo Yo finds himself in, a philosophical theory based on circular logic that asserts that, no matter how many ways you try to work it, there is no way to because it is actually working against itself. The paradox of a no-win situation based on rules that inherently contradict themselves is at the core of Yo Yo’s frustration—the harder he tries to escape, the deeper he becomes enmeshed.

The philosophical bent of these six episodes, which play seamlessly together, is so sewn into the fabric of the storytelling and the character building that you hardly even notice the myriad themes that seep through. Davies and Michod set a unique tone that ranges from the absurdly comic to dramatic to satirical to downright farcical to soberly tragic, sometimes all in the same scene. I’m trying to remember another work I’ve seen that walks the line like this series does, genre jumping and emotion-tangling.

At the heart of all of it is the performance of Abbott, whose character’s dogged determination and singular purpose in life —to get out—drives every moment of the audience experience, and we are living the nightmare with him, through all the highs and lows, the hope and the heartbreak, the sanity and the morosely absurd. Abbott’s focus and steadfastness belie the torrent of emotions which lay just beneath the surface. He’s a mainly quiet actor who is perfect to play someone who is grounded and solid but we are unsure of just how much it will take to make him snap. Whether or not the actual snap happens is worth watching the series for because Abbott is an absolutely compelling center of the swirling craziness that is Catch-22.

Everything about this series is worth watching, from the gorgeous cinematography by Martin Ruhe to the costumes by Jenny Eagan to the production design by David Gropman. The score and the soundtrack, however, have to get particular acclaim here, as composer brothers Harry Gregson-Williams and Rupert Gregson-Williams color every scene with the perfect mood and whoever was responsible for the song selections—classic pop songs from the era, from Ella Fitzgerald to Rosemary Clooney (in a perfect bit of symbiosis)—deserves an award simply for the audible delight that this soundtrack is. The feeling of time and place is so perfectly created and the episodes so beautifully shot, you almost forget you are watching a nightmare play out. A beautiful, perfect nightmare.

But then there is the story, which twists us around, from war tropes to socio-political commentary to sight gags to absurdist meanderings, this script somehow finds a way to flawlessly morph itself into whatever it has to be for the scene. The writers nail every mood and the actors match them note for note. Kyle Chandler, who plays Yo Yo’s ambitious but incompetent commander, doesn’t get enough credit for his comedy skills, but he exercises every one of his muscles here, as his masterfully ironic comic performance is a true highlight of this series. The entire cast is pitch-perfect, as a bunch of guys who all seem to be cut from the same cloth—young, white and full of life—each find ways to distinguish themselves. The writers don’t short-change anyone, despite the challenge of having to tell such a broad story with so many different brush strokes.

And let’s not forget this is an actual war mini-series. The battle scenes, mostly in the sky, are quite good, the tension viable. No cost was spared in the making of this movie-in-six-parts and it shows. All the production elements are first-rate and as good as anything you will see on a big screen.

But the overall and lasting effect of Catch-22 is exactly the philosophical ideas which form its foundation. The absurdity of war, the redundancy of it all, the hopelessness and the pointlessness—it all gets wrapped inside our hero, the hero who refuses to give into it, who refuses to accept the fate that he is predestined for. What moved me the most about this story is the inherent sense of hope that lies buried below the layers of cynicism. War most certainly is hell, but surviving it just may be the path to our humanity.