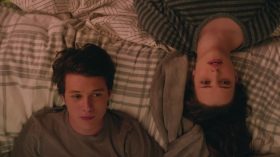 Those who know me best know that I am an unapologetic lover of ‘80s nostalgia. To be honest, just calling it “nostalgia” makes me feel old, but it is what it is. Time marches on and the brutal fact is that even ‘80s nostalgia, which was once the hip and cool thing, used to sell products and play over the speakers in stores, has now been left behind as the ‘90s are moving in. Duran Duran has been replaced by Backstreet Boys and Alicia Silverstone has replaced Molly Ringwald. It was nice while it lasted.

But, for me, the ‘80s will always rule. I mean, I was aged 10-20 in the ‘80s, so you can’t really blame me. That’s my entire cultural and societal awakening years, there. Music, movies, books, trends, fads—my pop culture DNA is all ‘80s. Which is why I feel like I can judge teen movies, even into my 40s. Because if there’s one thing the ‘80s will have over every other decade is its teen movies. Any other generation and decade can try to argue, but it is a fact. Other decades may have had beaches, blankets and Bingo or clueless virgins, but the ‘80s had John Hughes. End of conversation.

And those are just the John Hughes movies (either written by, directed by or both). That’s not even mentioning other classic ‘80s teen movies like The Outsiders, Say Anything, Fast Times at Ridgemont High, Bill & Ted’s Excellent Adventure, Revenge of the Nerds, Porky’s, Heathers, Better Off Dead, Lucas, Valley Girl, Less Than Zero and Footloose. That’s a pretty good lineup, it’s hard to argue.

So, whenever there’s a new teen angst movie that comes out, I feel naturally drawn to it, like a moth to a flame. I just can’t help myself. I am still in love with teen movies, even non-‘80s ones, like Clueless (1995), Juno (2007), Easy A (2010), Perks of Being a Wallflower (2012) and may favorite one of all, Mean Girls (2004). So, yes, I was there on opening night of Love, Simon, the new movie about a teenager trying to figure out how to come out of the closet, from director Greg Berlanti. You already know I love teen movies, but a teen movie about being gay? Color me thrilled. Now I just had to hope it was good.

Greg Berlanti is best-known for teen television, not teen movies. He is the force behind such series as Dawson’s Creek, The Flash, Supergirl and the hugely popular Riverdale, in addition to writing and directing the classic gay romantic comedy (there aren’t many of those) The Broken Hearts Club. Two things we can always count on from the openly gay Berlanti: gay characters and somewhat cheesy melodrama. Love, Simon is chock full of that, but Berlanti manages to surpass even his best Dawson’s Creek moments with a movie that is more than cheese, it’s got a lot of heart too.

Love, Simon may not break any box office records (although the theatre we were in last night was full—and yes, we were the oldest ones there) or win any awards, but it is a perfectly charming trifle of a movie that makes an attempt to say something deep, which is always appreciated. Starring Nick Robinson as Simon, a 17-year old high school senior who knows he’s gay but hasn’t told anyone yet, Love, Simon follows a predictable story arc and features stereotypically drawn characters in a totally homogenized environment, but it still is a pleasing palate cleanser after a dramatic and serious Oscar season.

The one thing that intrigued me about this movie, though, was its central premise: a well-liked high school senior, with lots of friends and the perfect family (a therapist for a mother even) in the perfect American suburb (we don’t even know what state, but it clearly is the East Coast) has angst about coming out in 2018? Is this still a thing? I mean, I’ve been out of the closet for 24 years, so maybe I have no memory of what it’s like to be in, but I thought this was the generation that was cool with being gay? Still, I can see that, no matter how much times change, it will always be hard to be a teenager and to be what is perceived as different. Even so, I still have to say that it seemed a little odd to me that the central tension of this movie is a well-adjusted, well-off white kid stressing out about being gay.

But maybe that is exactly the great thing about Love, Simon. Simon is not filled with angst about BEING gay. He’s stressed out about HOW to be gay. More specifically, how to tell his group of friends and his family. He knows, in his heart of hearts, that everyone will be supportive, but this is a big thing to say because once it’s said, it can never be unsaid. Coming out is one of the biggest, if not THE biggest moment in any gay person’s life, and it’s often the most carefully made decision of their life. It’s one thing to know it about yourself…it’s quite another to tell the world. And this is where Love, Simon does get it right.

Other than that, however, Love, Simon is a pretty run-of-the-mill teen movie. In fact, it’s so ordinary it feels like it could have been a TV movie or an episode of TV instead of a full-blown studio release, but it’s still nice to see representation, no matter the depth of it.

There’s really nothing to write home about as far as the acting or the writing goes. Robinson is endearing as Simon, and you do root for him. Jennifer Garner and Josh Duhamel play his perfect parents and Katherine Langford and Alexandra Shipp stand out as his friends, but the simplistic script leaves much to be desired. If nothing else, Love, Simon is a great movie to encourage your kids to see, especially if they are teenagers. For the rest of us, enjoy the lollipop with a chewy center.