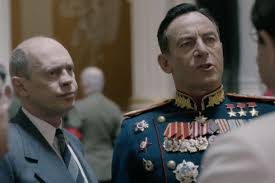 Never before in my lifetime has the world been more politically charged, more anxious about the fortitude of their leaders, more distrustful of their decisions and more worried for the future. It is in this atmosphere that the popularity of political satire is soaring, especially in the United States, from Saturday Night Live to late-night talk shows to television shows like Veep, the cultural climate has never provided the people such smart and revealing outlets for their frustrations, fears and disbelief in what is happening around us.

As such, there has never been a more perfect climate for The Death of Stalin, a new film from Armando Iannucci. Although it is set in the former Soviet Union in the fifties, it feels no less relevant now to anyone who is aware and concerned about world politics—and who finds the remotest bit of humor in how it’s all playing out, no matter how black that comedy may feel.

The Death of Stalin is an almost farcical satire of the last days of Josef Stalin and the chaos that ensued after his death. It focuses on his inner political circle, the Central Committee—essentially Stalin’s cabinet—and how they work (or don’t work) together to bring stability to the country and the government after the death of its most fearsome and powerful leader.

The Death of Stalin is co-written and directed by Armando Iannucci, who is perhaps best-known to American audiences as the creator and co-writer of Veep, an HBO comedy series that satirizes the inner workings of the American government. Iannucci is one of the best and most thriving satirists working today, who, in addition to Veep, has written the screenplay for In the Loop (nominated for Best Adapted Screenplay Oscar) and created a series in England that ran from 2005-2012 called The Thick of It, about the British government. He also created one of my favorite non-political characters, Alan Partridge (played brilliantly by Steve Coogan), a spoof of talk-show hosts.

So to have Iannucci direct his lens and his attention to such a crucial moment in the history of geopolitical transition should make any lover of satire salivate. And boy, does he deliver. The Death of Stalin is not only genius in its delivery, but achingly accurate in its depiction of how we would imagine the chaos of a totalitarian regime change would play out. If you wonder what on earth could be funny about the death of one of the most brutal dictators in history, give Iannucci a chance to show you.

There is a comic brilliance to be found in The Death of Stalin, as the juxtaposition of the buffoonery portrayals of Stalin’s inner sanctum next to the murderous and terrorizing hammer that gets thrown down against the Soviet people in an effort to counteract the perceived instability at the top is unnerving but done in such a brilliant way that your laughter feels like a commentary in itself about the absurdity of it all. You will never find yourself laughing so hard at inhumanity, brutality and terror. Just as in today’s world, we must be able to look at the horrors of the world and the sometime tyranny of leaders through a comic lens or it will just be too overwhelming. We know this all too well in today’s America.

While Iannucci’s direction and script (which he co-wrote with David Schneider and Ian Martin, based on the book by Fabien Nury) are obviously the stars here, the performances play out Iannucci’s brilliant farce with precision and absolute abandon. Led by Steve Buscemi as Nikita Khrushchev and Simon Russell Beale as Lavrenti Beria, the entire cast is hilarious in their wide-eyed portrayals of men who are literally lost without the man who had an entire nation in a stranglehold and ruled with an iron fist. The jockeying for power between them is dynamically done, as all men are equal parts ineffectively weak and aggressively ambitious. After so many years at the feet of Stalin, nobody really knows how to think for themselves, let alone figure out how to make anything happen. Buscemi and Beale are pitch-perfect, as are Jeffrey Tambor, Michael Palin and the powerhouse Jason Isaacs as the leader of the Red Army. Isaacs, best-known as Lucius Malfoy in the Harry Potter series of films, will blow you away with his fierce and funny portrayal of the man partially responsible for defeating Hitler.

While The Death of Stalin is absolutely genius, it is absolutely not for everyone. The language is as salty as it gets, and it does not shy away from showing the brutality that barbarous regimes use to keep its people in their place. But there is a place for satire, even in the darkest corners of human history, and this is what is examined—and made outrageously funny—in this brilliant movie. For anyone even remotely frustrated in today’s world and is looking for an outlet for their disappointment and anger, I recommend The Death of Stalin most whole-heartedly. It may not make anything better, but it just may relieve some of the tension you didn’t even realize was there.