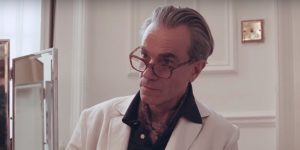 If you would have told me that the last movie of Daniel Day-Lewis’s career would be a pointless curiosity of a film, I would not have believed you. If you had added the fact that the cinematic confection had been written and directed by Paul Thomas Anderson, I would have been confused as well. I just saw Phantom Thread and I’m still not sure what I saw. But for this to be the final collaboration between one of the finest actors of all time and one of his generation’s most revered directors feels not only odd, but strangely unsettling.

The last time Anderson and Day-Lewis worked together, the resulting film was There Will Be Blood, a fiery, complex and fascinating movie about greed, industry and America. Phantom Thread is quite the opposite. It is quiet, introspective and not about much at all. I suppose it could be considered a rumination on genius or creativity, but I just found it to be a semi-compelling movie about horrible people feeling sorry for themselves. I mean, really, who has time for that.

Yes, Phantom Thread is gorgeous and well made. It’s about a famous fashion designer, Reynolds Woodcock, played by Day-Lewis, in 1950s London. Woodcock runs a prestigious design house and creates one-of-a-kind dresses for the most famous women in the world. As such, he is constantly working, designing and showing his creations to his patrons, who revere him as a deity. As such, he has women at his feet, in love with the genius or his aloofness, for Woodcock is an obsessive workaholic whose only interests are his designs. Women in his life are merely mannequins—living objects for his creative inspirations. But there are two women who separate themselves and end up dominating his life. One is his sister, Cyril, played by Lesley Manville, and the other is his newfound muse, Alma, played by Vicky Krieps. In Cyril, Reynolds has his opposing life force, the person who manages his work and his life and seems to be the only one who can say a negative word to him with no fear of repercussion. Alma, on the other hand, is Reynolds’s new creative spark, a young, perfect body upon which to hang his fabric.

You would think the movie would be about Alma and Cyril competing for Reynolds’s attention, but this is no ordinary movie. In a Paul Thomas Anderson movie, nothing is as you would expect and almost nothing is as it seems. Phantom Thread is not only an extremely odd film, but it also manages to stay surprisingly compelling while being strangely revolting.

Phantom Thread is somewhat brilliant in how it plays out. It seems to be a run-of-the-mill period piece, filled with bourgeois people doing bourgeois things, and it feels like you’ve seen it before. But then, before you know it, Anderson turns it all on its head—very finely and subtly—and you wonder what you actually are watching. It’s almost as if Anderson is playing a joke on his audience, making them think the movie will be one thing and it ends up being another. But no matter how the tone changes, the fact remains that, despite its complexity and compelling nature, Phantom Thread is still a movie about unlikeable people doing unrelatable things. In itself, this might be worthwhile if there’s a compelling story, but, for me, it just fell flat. While there is story, Phantom Thread is mostly about characters and how they relate to each other and it’s very difficult to enjoy when you find all of them so loathsome.

All that being said, this is the farewell to the greatest actor of his generation, and Phantom Thread serves Daniel Day-Lewis well. He is his usual brilliant self, capturing all of his reserve, texture and layers that he brings to all of his performances. Obviously, if nothing else, this movie is worth it just to watch a master at work.

But, overall, Phantom Thread left me cold and confused. There were times I felt compelled to laugh out loud, and others that made me nauseous. To call this movie weird would be an understatement. I absolutely believe this is what Anderson was going for, so he would be thrilled. But, whether that inspires you to go out and spend an evening with it is completely up to you.