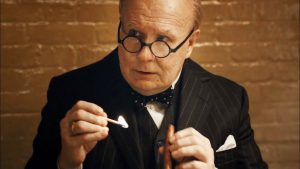 For those of you who weren’t crazy about Christopher Nolan’s Dunkirk (and I know there are a lot of you) earlier this year, maybe Darkest Hour will be more to your liking. They both cover the same time period, deal with the same central event, and are completely different.

For both films, the central plot point of the movie is the stranding of British troops at Dunkirk, France, during World War II. At the time, the British had to figure out how to rescue/evacuate their trapped army by water before the German troops could attack them by land. This pivotal decision (one that could have changed the course of the war) was left to the newly-installed British Prime Minister Winston Churchill. In Nolan’s Dunkirk, Churchill and all his decision-making is offscreen. But, in Darkest Hour, Churchill is front and center. Dunkirk was the brawn, Darkest Hour is the brains.

But don’t be fooled. I’ll tell you this right here and now, so you know what you’re getting if and when you buy a ticket for Darkest Hour. You will NOT be getting a war movie. You will NOT be getting a movie with action and excitement. What you will be getting is a very talky character study about a man who was at the center of one of the most critical moments in human history. This inherently makes the movie interesting, but it falls far short of being anything anyone would dub riveting.

Darkest Hour is a bio-pic, through and through. And at the heart of it is a magnificent and towering performance by Gary Oldman as Churchill. Oldman certainly had a steep hill to climb to create a memorable impression of Churchill so soon after John Lithgow personified him to such acclaim last year in the Netflix series The Crown, for which Lithgow won an Emmy and a SAG Award. But Oldman is up to the task and he delivers a performance that is his career’s crowning achievement. I can’t imagine Oscar not calling his name in March.

But no matter how good Oldman is, his performance, sadly, is the only thing to recommend this movie. Director Joe Wright and screenwriter Anthony McCarten try to make political speeches and backroom negotiations exciting, but they fail to light any effective fire. When the most excitement a movie has to offer is seeing if a secretary can keep up with rapid-fire dictation, then you know you’ve got a talky movie.

I really wish I could get behind this one more, but it’s one of those movies that’s built around and focused on one singular performance. While that performance is exceptional, I wish there had been more to support it. Now that I think about it, maybe they should create a mash-up of Dunkirk and Darkest Hour, to really give the audience the full picture. Now THAT’S a movie I’d like to see.