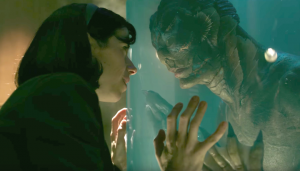 Guillermo del Toro has often been thought of as the least talented of the trio of respected Mexican movie directors that have almost literally taken over Hollywood in the last decade. I mean, when you look at the other two, Alfonso Cuaron and Alejandro G. Inarritu, it would be easy to think that del Toro takes a back seat. Inarritu already has 4 Oscars (two for directing, one for writing and one for producing) and Cuaron two (for directing and editing), while del Toro has only been nominated once. Inarritu and Cuaron’s impressive list of movies include The Revenant, Gravity, Children of Men, Birdman, and Babel. They are both considered among the best in the business, serious dramatic auteurs whom actors and craftsmen long to work with.

That’s not to say that del Toro isn’t sought after, it’s just that he seems to be forging a different path. Instead of staying on the more traditional dramatic route (the path that leads to Oscar), he’s chosen to explore more offbeat genres, like fantasy, action and horror. He’s directed some of the 21st century’s most imaginative and unique films so far, like Pan’s Labyrinth, Pacific Rim, Hellboy and Crimson Peak. He wrote all three films in Peter Jackson’s The Hobbit trilogy, created a television series, The Strain, and produced the animated hit The Book of Life. Del Toro most certainly lives in a different artistic land than most other directors. His movies are distinctive, in look and feel, and he is truly coming into his own as an auteur in his own right.

And if ever there was a film to certify del Toro’s unique genius to the world, it’s The Shape of Water. Directed by del Toro and written by del Toro and Vanessa Taylor, The Shape of Water is a hauntingly beautiful fable set against the backdrop of Cold War era America in 1962. It is a fairy tale of love and longing that is one of the most beautiful films you will ever see, and one of the most moving.

The story is simple and that’s part of its charm. Sally Hawkins plays Elisa, a mute cleaning lady who, along with her friend Zelda (Octavia Spencer), work the night shift as cleaning ladies at a government research facility. One night, Elisa stumbles onto one of the experiments, a sea creature that is being kept for observation and testing. Elisa and the creature (played underneath a lot of incredible makeup by Doug Jones) forge a connection. They fall in love, and Elisa and Zelda come up with a plan to set the creature free, with the help of Elisa’s best friend Giles, played by the magnificent Richard Jenkins. Standing in their way is the evil (all that’s missing is the moustache to twirl) government man in charge, played by Michael Shannon.

You’ve seen all of this a hundred times before—I couldn’t help think of Splash and E.T. in particular—but I guarantee you’ve never seen a movie like this before. Del Toro’s direction, along with the absolutely stunningly gorgeous cinematography by Dan Laustsen, production design by Paul D. Austerberry, and haunting yet whimsical score by Alexandre Desplat, all combine to create a world that’s fantastical, beautiful, melodic and unnerving. The color palette is both sensual and serene, juxtaposing the earthly cool tones of Elisa’s world with the warm, soothing hues of the creature’s underwater existence. Because the two main characters don’t speak, it’s natural for The Shape of Water to be a visual experience, but the beauty that del Toro finds everywhere is sometimes breathtaking. There are a couple of segments in particular that are truly stunning.

The Shape of Water is a fable, so there are some fantastical elements that will either work for you or they won’t. But the only way to experience it is to let it literally wash over you, breathe it in and truly experience del Toro’s masterpiece in all its glory.

While The Shape of Water is a truly amazing film (maybe my favorite of the year), it’s not perfect. Because it’s a fable, most of the characters come off as one-dimensional, especially Michael Shannon’s baddie. He chews the scenery with the best of them, and his character is as evil as evil can get. Octavia Spencer is not given nearly enough to do and I’m really not sure what the point of Michael Stuhlbarg’s character is. But it almost doesn’t even matter. The Shape of Water belongs to Sally Hawkins and Richard Jenkins. They both deliver performances that will melt, break and swell your heart. Jenkins is delicate and sweet, naïve and vulnerable. He walks the line between being pathetic and heroic and truly makes the most out of a character that could easily be overlooked. As for Hawkins, she manages to turn a soundless performance into a work of art. Never overplaying it, she finds all the ways of expression, from fear to longing to sorrow to joy.

The Shape of Water is a delicate, soulful, beautiful and melancholy ode to love and compassion and it is everything you’ve heard and more. Guillermo del Toro has finally found his sweet spot—and, hopefully, everyone will finally give him the respect and admiration that he is due.