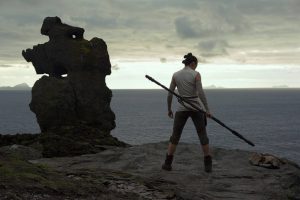 When my beloved Boston Red Sox won the World Series for the first time in 86 years in 2004 and then won it again three years later, Red Sox fans tearfully proclaimed the 2004 victory was for their grandparents, and the 2007 win was for them.

Bear with me, I do have a point here…

The Force Awakens was for our grandparents, The Last Jedi is for us.

The Force Awakens was the movie all Star Wars lovers had longed for. It had all the spirit, tone, sensibility and personality of the original trilogy. It was like putting on an old pair of slippers: it was familiar, comfortable and easy.

It took me a while to come around, but I see now that the franchise couldn’t possibly continue to stay stuck where it was. It had to evolve and grow beyond our nostalgic desires to stick with what we knew and loved. Johnson is a storyteller and he proves his capability with The Last Jedi, a movie that not only moves the story along, but builds on the mythology and expands the universe of Star Wars.

I obviously will not reveal any spoilers here, I will just say that there were some elements of The Last Jedi that disappointed me, but there were more elements that delighted me. The inclusiveness and the breadth of the world Johnson creates is invigorating and exciting. You’ll see things in The Last Jedi which you’ve never seen in any other movie—and isn’t that the way it should be?

The special effects are wonderful (no need to see it in 3D, however), as always, and the new (and old) creatures are wonderful and wacky. The cheesy humor is at times awkward, other times delightful, and the diverse casting choices are not only forward-looking, but sincere. Johnson plays so many different notes, from melancholy to camp to heroic to farce, and it all works, for the most part. The performances, as in all Star Wars movies, are secondary to the effects and world-building around them, but Daisy Ridley, Kelly Marie Tran, Mark Hamill and Adam Driver stand out. Hamill in particular shows how far he has come as an actor since we last saw him as Luke Skywalker.

If you are a true hardcore Star Wars fan, The Last Jedi may confuse and unbalance you at times, but, in the end, it will excite you for all it is and all that is yet to come. This one really is for us.