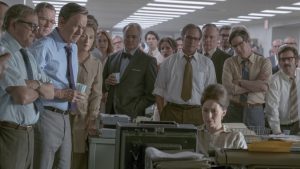 Tried and true, solid and professional, The Post is exactly what you expect it to be. Steven Spielberg is nothing if not reliable. The Post is an old-fashioned, traditional movie in the spirit of All the President’s Men and Bridge of Spies. It’s about sincere white people trying to expose the powerful few for the benefit of the many.

The Post is incredibly earnest, hard-working and purposeful. Unfortunately, it just doesn’t have much life. It’s not just that there’s not much action that goes on—it’s mostly made up of people talking in rooms—it’s also hard to make something exciting when the most crucial moment in the entire movie is someone making a decision.

Meryl Streep plays Katharine Graham, the publisher of the Washington Post in 1971 and Tom Hanks plays her editor-in-chief, the famed Ben Bradlee. Pre Watergate, the Post is desperately trying to keep up with the New York Times, both in reputation and financial viability, and when the chance at a really big story comes along, it seems a no-brainer to pursue and publish it. Only there’s a catch—if they do publish, they could all go to jail, since the papers they want to publish (the so-called Pentagon Papers) were illegally obtained and classified. So where does the public right to know override individual and civic responsibility?

Maybe this isn’t as old-fashioned as we thought. The Post reminds us that governments have been hiding things from the public long before Edward Snowden and Wikileaks came along, and the debate about whether to expose them is as old as the Constitution. The Post is very timely in this way, and a little ironic that such a staid and old-fashioned movie set in the ‘70s can actually feel so relevant to today’s issues of who knew what and when.

It still, however, doesn’t make the movie any more exciting, sad to say. Spielberg doesn’t have any new tricks up his sleeve, he just lets the actors do the work, and they are all more than up to the task. The performances are all first-rate, even and especially Streep, whose Graham is strong, determined and altogether human—making a decision that could affect so many lives and livelihoods, including her own, weighs heavily, but you never see her sweat. Hanks is solid, as is the rest of the first-rate ensemble cast, but The Post is another movie that’s more about ideas than actions. That’s not always a bad thing, but here, it’s just not enough.