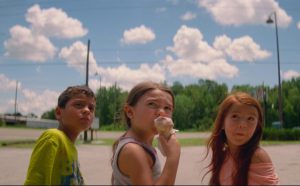 There have, obviously, been a lot of good movies about childhood. But I would have a hard time finding one that is as genuine, organic, heartfelt and realistic as Sean Baker’s The Florida Project. Set against the soft hues and bright sunshine of Disneyworld-adjacent Florida, The Florida Project follows a group of children who live in a seedy motel, one step away from being homeless. What would ostensibly sound like a depressing and soul-crushing premise, Baker instead creates a masterpiece of innocence and joy, an ode to childhood in all its various tones and beats.

Six-year-old Moonee, played wonderfully by Brooklynn Prince, has made the motel she lives in with her mother and the area around it her own personal playground. She and her friends fill their days with feats of imagination and mischief, finding joy in hundreds of little things. On the surface, it seems so sad to watch these kids, who have nothing, live in these conditions. You want to feel sorry for them, until you realize that, at this age, they are only filled with wonder and energy—too young to comprehend the gravity of their lives, but old enough to appreciate nature and friendship and have a genuine curiosity about the world around them.

There’s not much that actually happens in The Florida Project, and that’s just fine. It’s a portrait of the lives of these kids and the adults who surround them and what literally gets them through each day. The definition of humanity is to see and understand the lives of others, even if they are different from yours, and that has not been more heartfully rendered than here.

The economic hardship of the characters is juxtaposed by the light and sunny look of the film, as Baker, along with cinematographer Alexis Zabe and production designer Stephonik Youth, have filled every shot with bright sunlight and vibrant color—pastels and hues that feel like you’ve walked into a cotton candy factory. It’s gloriously wonderful to look at, until you realize the depth of meaning it contains—even paradise has an underbelly.

But what makes The Florida Project so moving is the genuine love Baker shows for his characters. These characters may be down-on-their-luck, some may even be criminals, but they all are truly doing the best they can. There’s no melodrama or judgment here, just the drama of circumstance, and nobody is feeling sorry for themselves.

The performances, mostly by first-time or non-professional actors, are all first-rate, believable and powerful in their realism. Willem Dafoe is the only one you’ve ever heard of and he is the backbone of the movie and he delivers the most human and moving performance of his career.

The Florida Project is worth making the effort to seek out. It’s the kind of movie that can easily get lost in the shuffle, but it shouldn’t.