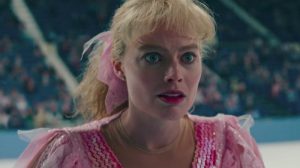 I have always been very close with my Mom, we did a lot of things together when I was a kid, but I have to admit watching TV together was always a favorite of the bonding experiences. She would watch General Hospital and Dallas and Dynasty with me, and I would watch tennis and figure skating with her. Those were really the only things she loved to watch, especially during Grand Slam tournaments for tennis and the Olympics for figure skating. Because of that, the athletes in those sports when I was younger became as familiar and beloved to me as the characters in my shows, if not more: Steffi Graf, Boris Becker, Gabriela Sabatini, Ivan Lendl, Mats Wilander, Katarina Witt, Brian Boitano, Scott Hamilton, Torvill & Dean (“Bolero” will forever be a part of my DNA) and so many more.

Winter Olympics were a big deal in our house, especially the skating events, so, of course, I am quite versed in the saga of Tonya Harding and Nancy Kerrigan, two American Olympic figure skaters who represented the United States in the Winter Olympics in Lillehammer, Norway in 1994. So, when I heard there was going to be a movie about the events surrounding the knee-capping heard ‘round the world, I was excited. What really happened? What did Tonya Harding know and how involved was she?

If you were looking for the new movie I, Tonya to tell the whole story, it does. But that’s not the only story it tells. We may all think we know Tonya Harding from the skating champion and the disgraced Olympian who became fodder for late night comedy and water cooler banter, but we never knew the whole story. As with most tabloid events, there’s always another side, another version, often the true (not as dramatic or sexy) story behind the headlines. In I, Tonya, we get to know Tonya Harding, the tabloid version and beyond.

The irony of I, Tonya is that it dispels most of the myths of Tonya Harding while simultaneously reinforcing them. Director Craig Gillespie eschews the classic bio-pic formula and creates instead a rousing, raw, raunchy and rebellious movie that reflects and honors its subject with humanity and brazenness.

At the heart of I, Tonya is a revealing and often heartbreaking look at Harding’s life, from her lower-class roots to her dysfunctional relationship with her mother to her abusive relationship with her husband. Harding may not have been directly involved with the attack on Kerrigan (or was she?), but her life and choices helped to create the world in which the attack happens. And her life was not a pretty picture. This serves as quite the contrast to the common perception of women figure skaters as perfect princesses and that’s just the point of I, Tonya. Figure skaters are athletes first and foremost, and gifted athletes come in all shapes and sizes. And personalities. Tonya Harding happened to be colorful and from the wrong side of the tracks, but boy could she skate. If you wanted the champion, you had to take the person, warts and all.

Gillespie’s style is forceful and indelicate, and he pulls no punches. The personality of the movie perfectly reflects the subject’s, as it moves at a breakneck pace and is bold, colorful and ambitious. Central to the success of the movie is actress Margot Robbie, who plays Harding with a forceful energy that never lets up. She inhabits her character with total abandon and a pathos comes through that makes Tonya Harding out to be a character straight out of Shakespeare, which doesn’t feel too far off. Her relationship with her mother, played by the horrifyingly brilliant Allison Janney, is tragic, and her twisted relationship with her husband, played by the excellent Sebastian Stan, is sometimes sweet, sometimes comic, sometimes ridiculous, but always dramatic.

I, Tonya is certainly not the sweet and loving look at the rise and fall of an American icon. Instead, it is brash, crass and utterly devoid of sentiment, which is what makes it so good. I loved its freshness, its energy and its fearless ability to tell a tragic story with humanity and wickedness. I think my Mom would love it, too.