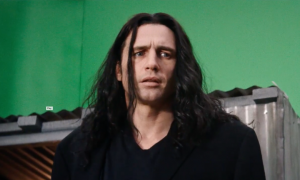 What defines a good bad movie? For me, the best bad movie of all time is Showgirls, a movie I find so entertaining that I could watch it multiple times (and have) and enjoy it every time. What makes it so entertaining? Despite the pointless story, the unlikeable characters, the crass and insipid dialogue and the misogynistic undertones, Showgirls is worthwhile because everybody in it, especially the star, Elizabeth Berkley, goes all in. They may or may not know how bad the movie is that they’re making, but, in spite of it all, they commit themselves 100%. Berkeley in particular makes Showgirls so entertaining because she delivers every line with such determination and purpose that you think she’s trying for an Oscar.

Like Showgirls, the movie The Room features a similarly-committed performance from its writer/director/producer/star Tommy Wiseau. Widely regarded as the worst movie of all time, The Room has a massive cult following, largely due to Wiseau’s odd and strangely mysterious appeal. Not only was The Room a terrible film, but it was completely self-financed and self-made, by a man seemingly more unknown than anyone in Hollywood history. Nobody knew who he was or where he came from, let alone how he could get a movie made. Wiseau’s continued dedication to the film, even after its completion, and even after the general acceptance by the world of how terrible the film was, cemented him his place in Hollywood lore.

There is no better subject for James Franco, a similarly oddball inhabitant of Hollywood, an enigmatic character who has generated both ridicule and praise for refusing to conform to the norms of being a Hollywood star. Franco is the perfect actor to play Wiseau and he is surprisingly good at it. Franco is a good actor (he has been nominated for an Oscar), but his choices have often left people wondering how serious he is about challenging himself. Well, he certainly has challenged himself with The Disaster Artist, a movie he not only stars in, but directed and co-produced. Written by Scott Neustadter and Michael H. Weber and based on the book by Greg Sestero and Tom Bissell, The Disaster Artist tells the inside story of how The Room was made, from initial “inspiration” through to the premiere, red carpet and all. In keeping with Franco’s sensibilities, the movie is weird and funny. Franco attempts to humanize Wiseau, although it’s difficult to humanize someone who doesn’t seem at all, well, human.

Franco and his crew do a fantastic job walking the line between mocking their subject and revering him, attempting to portray Wiseau as somewhat of an antihero, a guy who never gives up on his dream even though he is a complete and utter failure. Franco’s impersonation of Wiseau (yes, it is an impersonation) is dead on and his re-creation of many scenes from the original movie are beat-by-beat perfection in their accuracy, both in their ridiculousness and bravery.

We never do end up learning anything about who Wiseau is or what his backstory is, but that is really beside the point. What makes The Disaster Artist enjoyable is Franco’s willingness to go all in and commit whole-heartedly to a pointless character who is making a pointless movie. Perhaps the circular redundancy of this movie is the whole point. Leave it to James Franco to turn Tommy Wiseau into an existential antihero. That just may be what we deserve.