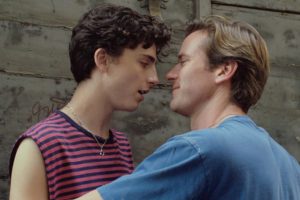 This probably isn’t the best time for a movie about a privileged white boy and his first-world problems to be an Oscar front-runner, but Call Me By Your Name, a new film from Italian director Luca Guadagnino (A Bigger Splash) is front and center in all the golden buzz and despite its seemingly elitist stature, it’s easy to see why.

Call Me By Your Name is a beautiful, luscious and meditative movie about first love but, even more than that, it’s about first understanding of love. It stars Timothee Chalamet in a star-making (and Oscar baiting) performance as 17-year old Elio, an American-Italian who lives with his parents in a grand 17th century villa in northern Italy. Elio’s father, played by the always-wonderful Michael Stuhlbarg, is an American professor of Greco-Roman antiquities and Oliver, played by Armie Hammer, is an American doctorate candidate who comes to spend the summer as his assistant. While sparks don’t instantly fly between them when they meet, we take note of Elio’s interest and curiosity about Oliver, who is handsome, confident, outgoing and seemingly endlessly self-assured.

Call Me By Your Name seems like a run-of-the-mill summer romance, one we’ve seen a hundred times: a seductive setting featuring two young lovers who know their time together is limited but they just can’t resist their mutual connection, but Call Me By Your Name transcends the typical summer beach or camp teenage romp genre. While it can be called a “coming of age” movie (yawn), it feels so much more grown up than other movies of its type, never cheapening itself with cliché. These characters are fully drawn and their attraction and relationship is complicated, which gives the audience a richer experience.

Similarly, Call Me By Your Name is not just a movie about summer love. Elio comes to (and struggles with) the awareness of his sexuality, but his attraction and subsequent relationship with Oliver allow him to become more comfortable in his own skin. This is a kid who knows so much about culture, art and history, but very little about the world. Somewhat annoying in his teenage arrogance, Elio is blindsided by these feelings that he has no clue how to act on and watching Chalamet play Elio’s arrogance/confusion/vulnerability is lovely.

Screenwriter James Ivory knows something about complex characters and the love stories that consume them. Best-known as being half of the Merchant-Ivory producing/directing team responsible for such classic movies as Howard’s End and The Remains of the Day, Ivory again taps into the themes of yearning and questioning set against a beautiful but langorous backdrop.

It’s impossible to ignore the fact that the setting of this movie is an integral part of its experience. The northern Italian countryside in the summer, shot magnificently by cinematographer Sayombhu Mukdeeprom, is so seductive and dramatic in its own right, it doesn’t take much for the audience to become as spellbound as Elio.

But, in the end, as much as I loved looking at this movie and LOVED the performances of Chalamet, Hammer and Stuhlbarg, it did leave me wishing I could have cared just a little more. It’s hard to get emotionally invested in characters who have the world at their feet, no matter how unfair that seems. It’s still well worth seeing, for all its seductive and beautiful charms. Just don’t expect it to change the world.