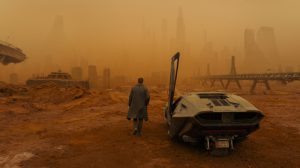 Hollywood has not had a good week. The sexual abuse scandal of Harvey Weinstein has rocked the movie industry, rightfully so. The worst-kept secret in this town was that Weinstein, arguably the most powerful producer/mogul/executive in the business, had been a serial slime for decades, using his position, power and influence to abuse, molest and intimidate young, aspiring actresses. Women are finally speaking out en masse about it and, even though Weinstein seems to be finished, the taint of the scandal is only now beginning to spread throughout an industry that has been, at worst, supportive of Weinstein’s behavior and, at best, culpable for silently fostering it.

The irony of all of this is that 2017 has been one of the best years so far, artistically-speaking, for the embattled movie industry. There have already been 30 major releases in 2017 that have scored an 80% or higher rating on rottentomatoes.com, largely considered the most reliable indicator of a movie’s quality. The movies that have engendered great reviews have included both low-budget indies like The Big Sick (98%), The Florida Project (96%) and Baby Driver (93%) as well as some of the year’s biggest blockbusters, such as War for the Planet of the Apes (93%), It (85%), Wonder Woman (92%) and Spider Man: Homecoming (92%). Not a bad year so far for quality movies….and it’s not even Oscar season yet.

So what does this say? As someone who loves movies but doesn’t love the industry that makes them, it’s sometimes uncomfortable to continue to support it, but damn if the machine doesn’t still produce a quality product.

Side story: Since I was 12, I wanted to be in movies. Not in front of the camera, but behind it—a director or writer at best, some cog in the gears at worst. When it was time to pick a college, I knew I wanted a small, liberal arts school. I was on the East Coast, so all I knew from liberal arts colleges were in the northeast. It was almost a given that I would be going to school in New England somewhere. But then, in my tome of colleges that was provided to me by my ever-supportive and encouraging father, I found a listing for a small, quality liberal arts college in Los Angeles! No way….Hollywood? And, it just so happened, we had a summer trip to Hawaii planned for the summer before my senior year, so….. My Dad suggested, since I needed to practice my college interviewing skills anyway, that we stop by this L.A. school on our way to Hawaii and use it as a practice run for the New England schools that were to be taken more seriously in the Fall. So we did. The small school, the “practice run” as we called it, was Occidental College and, well, the rest is history. Did I go to Oxy because I fell in love with the school? Did I go to Oxy because of its great reputation? Or did I go to Oxy because I found out I could do an internship at a movie studio/production company while I was there? I’ll let you guess.

Anyway, I did do that internship at a production company. It was a small company that specialized in small, low-budget, semi-sleazy movies, but it was a legit movie-maker. I got to see the whole structure and feel the atmosphere of a movie company, from the office to the set. And I can tell you, after 7 years of desiring to make my future in the business and to do whatever it took to get there, it took a couple months at a small, unimportant production house for me to be turned off the industry forever—at least of being a part of it. Nothing bad happened to me, but everything about the experience just turned me off. I understood early on that there were three things you needed in abundance in order to make it in the movie industry: connections, an ability to be fake and ruthless ambition. I had none.

So I went back to my little wonderful college and continued my education, getting my degree in English, which would prepare me for absolutely nothing in the real world, but at least it was something that I could respect. It took me a while to get over my disillusionment of the movie biz—I still don’t think I am—but I knew I made the right call. If I continued to pursue a career in the business, at least on the production side, I would have had to change most things about who I was, and that was not something I could sit with. So I ended up being happy to be a fan of movies instead of a maker of them. And that’s ok with me.

But the POINT of this story is this: Hollywood has been a negative force in so many ways for so long. This Weinstein story is only the tip of the iceberg of how disgusting it can be. It was toxic enough in such a small dose to turn me off….someone who wanted nothing else from the age of 12.

So you may wonder why, after all that, that I still support the movie-making business? Call me hypocritical to continue to support and love an industry that supports and coddles scumbags like Harvey Weinstein (and there are more like him, trust me), but I love movies. I love the way they’ve made me feel my whole life and I love the escape, the emotions and the experiences they provide. They are my haven, my respite, my retreat and my happiness.

And its movies like Blade Runner: 2049 that continue to bring that home.

Blade Runner: 2049 is a feast for the senses. It is a long-awaited sequel to the cult classic Blade Runner from 1982, starring Harrison Ford, about a policeman who searches for rogue replicants in a dystopian future. Director Ridley Scott did in Blade Runner (and Alien in 1979) what James Cameron did in The Terminator (1984) and what George Lucas did in Star Wars (1977): they expanded the universe. They showed us how exciting and engaging science fiction could be. We could be terrified and excited at the same time.

Blade Runner: 2049 is absolutely magnificent. Putting aside the fact that it has a terrific screenplay by Hampton Fancher and Michael Green (based on characters created by Philip K. Dick) and is directed with meditative and emotive precision by Denis Villanueve, Blade Runner: 2049 is a near-perfect looking and sounding movie. The score, by Benjamin Wallfisch and Hans Zimmer, is both terrifying and hypnotic. It engulfs you, excites and unnerves you. It is loud and powerful, but, unlike the overwhelming score of Dunkirk (also by Zimmer), the volume and texture of the music here works in every way.

But the experience of Blade Runner: 2049 is all about the visuals. Cinematographer Roger Deakins’ resume speaks for itself, as he has created some of the most memorable cinematic experiences of my movie-going life (Barton Fink, Shawshank Redemption, Fargo, No Country for Old Men, Skyfall, Sicario, just to name a few), but he outdoes even himself in Blade Runner: 2049. To call this movie a masterpiece is not an overstatement. The movie is long (2:43), but Deakins fills every frame with a beauty that makes the time fly. The production design by Dennis Gassner is also absolutely brilliant. Between the cinematography, the score and the production design, I can’t imagine there could be another movie as good as this in 2017 (or maybe ever).

For those of you not as into the craft side of things as I am, the story and the acting are pretty great too. From Dave Bautista all the way to Ryan Gosling, the performances are stellar. Even Harrison Ford, who sometimes acts like he doesn’t even want to be there, is fine. It did take me a while to warm to Gosling in a dark, dystopian movie—I have a hard time seeing him as anything but a modern, loveable, smartaleck—but I eventually came around as he proved himself capable of finding the right tone and gravitas.

It’s hard to find anything bad to say about Blade Runner: 2049. If you loved or even liked the original, you must make a beeline to this as soon as you can (and see it on the big screen!). There are so many references and call-outs to the original that fans will eat it up. And if you didn’t love the original, or didn’t even see it, don’t worry (although seeing it certainly would help for a fuller appreciation). This movie stands on its own as a vibrant, breathing, living work of cinematic brilliance that will captivate you, engage you and delight your senses. It’s everything you hope movies can be—and we need to be reminded of that now more than ever.

Postscript: I’m big on principles. Anyone who knows me knows that. So I have to say that it is sometimes hard to celebrate and continue to spread love for an industry that continues to empower egotistical assholes (sorry, Mom). My only solace is that, just like in politics, where there’s an Obama for every Trump, I have to believe that the light will eventually shine on the Harvey Weinsteins and they will eventually be called out and put out. I choose to believe there are more good people than bad and the work they do still creatively inspiring and purposeful.