Before I left on my 2 ½ week European vacation (I know, right?!) in July, there were two movies in the theatres that I really wanted to see: Baby Driver and The Big Sick. I managed to make it to Baby Driver, but, because The Big Sick was only open in limited release, I didn’t get to it.

Then, when I got to Prague, of all places, the universe sent me a sign. Literally. 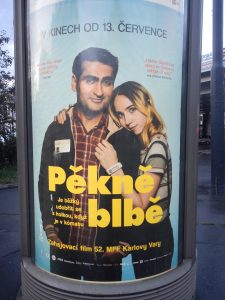 That was all I needed to both feel guilty (for not having made the effort to see it before I left) and excited (this little indie movie was getting traction all the way in the Czech Republic?), so I knew I would make it a priority to see when I got back.

But, don’t fret, there’s a happy ending to this story. The Big Sick is now available for rent from multiple streaming outlets (yes, this is a thing now), so, last weekend, I rented it via DirecTV On Demand (that still contributes to the movie’s coffers), and, lo and behold, it is as good as I had hoped it would be—and definitely worth the wait.

The Big Sick is the passion project for actor/writer Kumail Nanjiani, who is best-known for playing Dinesh on HBO’s Silicon Valley. The Big Sick is loosely based on Nanjiani’s real-life story of how he met his wife Emily V. Gordon. And while it’s good for you to know at the outset that the movie does have a happy ending, the movie itself is a whirlwind of emotions. It’s the classic ”laughing through the tears” cliché completely come to life.

But here’s the thing. This is NOT Terms of Endearment or Steel Magnolias. You know, those movies that make you bawl uncontrollably then they hit you with hilarious zingers that are meant to make you forget that you’re crying so hard you can’t see straight? No, The Big Sick’s tears are as soft-peddled as its comedy. But no less effective. It’s simple and real, the comedy AND the tears come from places you know, not from an exaggerated situation that doesn’t feel real. I was not expecting to feel so much from this movie, but it totally sneaks up on you.

Nanjiani is the emotional and literal center of this movie as you watch him live the life of a struggling stand-up who is wrestling between his dreams of comic stardom and the wishes of his traditional Pakistani-American family for him to find a nice Pakistani wife, become a lawyer and settle down. He’s not interested in having his marriage arranged and his future planned out, however, so he continues to be the family’s disappointing black sheep. Meanwhile, he is dating a nice American woman, Emily, played by Zoe Kazan. Then everything goes haywire when Emily gets sick with a mysterious disease that puts her in a coma. Kumail is forced into a strange and bewildering situation, not the least because he meets Emily’s parents (Holly Hunter and Ray Romano) for the first time over Emily’s sickbed.

Nanjiani and Gordon co-wrote the screenplay, which explains why everything in this movie feels so real—and why it works so well. They tell their touching story with realism, humor, heart, compassion and a reverence for family that is truly moving. The performances are thoroughly enjoyable as well, from Hunter, Romano and Nanjiani, who play off each other so comfortably, to Kumail’s warm-hearted and well-meaning but demanding family, played by Anupam Kher, Zenobia Shroff and Adeel Akhtar.

Even though the movie is incredibly warm and touching, I cannot emphasize also how absolutely hilarious this movie is. Producer Judd Apatow and director Michael Showalter make the most of the comic gifts that abound, from the organically funny script to the plethora of actors with fantastic comic timing. Everything just clicks.

Everything and everyone in this movie is effective because it feels straight from the heart. The Big Sick may not be in the theatres anymore, but it is well worth seeking out as a rental. It’s probably better suited to watching at home anyway. I hate crying in public.