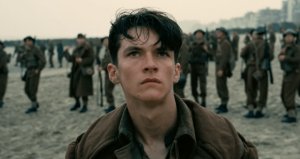 I’ve already heard many words used to describe writer/director Christopher Nolan’s new movie, Dunkirk. The loudest one I’ve heard from movie critics and commenters has been “masterpiece.” Critics are roundly praising Dunkirk as a visionary piece of cinematic excellence that will wow you and stay with you long after you leave the theatre.

As for me, I am chagrined to say I can only agree with some of that.

Nolan is a visionary filmmaker, there is no arguing with that. The Prestige, The Dark Knight, Inception, Interstellar—each of these films is powerful, elegantly brutal, haunting and beautiful. And Dunkirk is no exception. But what’s interesting to me is to note the element that always made a Nolan film unique is the one thing that is missing from Dunkirk: complexity.

Most, if not all, of Nolan’s movies are intellectual endeavors of some kind, deep dives into the psyche, haunting ruminations about the human heart, soul, and capacity for both evil and salvation. Dunkirk has none of that. It is nothing more than a meditation of war, a chilling moving snapshot of a place and time in history, and all the sights and sounds that accompany it. Powerful, yes. Complex—not so much.

If you’re looking for a typical Nolan mind-bender of a story here, you’ll be sorely disappointed. Dunkirk is a movie that broadly—and loosely— tells the story of the forced civilian evacuation of British and French forces during World War II, when they had been pinned down in Dunkirk, France, Nazi forces on one side, the looming ocean on the other. We know from history books that British forces were unable to rescue the men—some 400,000 troops—because of the shallow water in the channel, so a civilian fleet of fishing boats, pleasure boats and even row boats was commandeered to ferry the soldiers to safety. Read up on your history before you see the movie, because Nolan’s screenplay is light on exposition and the little dialogue that does occur is difficult to understand (I managed to only understand about half of all the spoken words—don’t know if the sound system or the movie is to blame).

Either way, history and dialogue are definitely not Nolan’s focus in Dunkirk. This movie is all about that feeling deep in your gut when you sense something looming. It is relentless. All your senses are heightened, your nerves tingling and your heart pounding. Dunkirk is a war movie, but it is unlike any war movie you’ve ever seen. It is bloodless and emotionless. It is distant and cold. But it puts you right there, in the thick of it, bullets and shrapnel whizzing past your ear, water filling your lungs, hope fading fast. Nolan and cinematographer Hoyte Van Hoytema create moments of visual brilliance, stunning camerawork and angles that are sure to be studied in film classes.

And, underneath it all, every single second, lurks Hans Zimmer’s ominous score, a cacophony of sound that rises and falls, ebbs and flows, but never, for a single second, lets up. The only enemy we ever see in this movie comes from the air, and Zimmer’s tension-filled cauldron of dread perfectly reflects the ever-present danger of German warplanes.

It must be noted that even though Dunkirk’s strengths are all in its technical achievements, the human beings in this movie are not to be overlooked. Mark Rylance and Tom Hardy are the most recognizable members of the cast, and both are great to watch, if not under-utilized, but the rest of the ensemble, mostly unknown actors, are good as well, especially Fionn Whitehead, Tom Glynn-Carney and, yes, Harry Styles.

But, again, Dunkirk is not about the acting. It’s not about the story and it’s certainly not about any emotional connection. Dunkirk is an achievement in direction that deserves to be admired. Its structure and visual gymnastics are enough for any cinephile to praise. But, for me, I was hoping for a little more…something. I can’t put my finger on it, but Dunkirk left me cold. And empty.