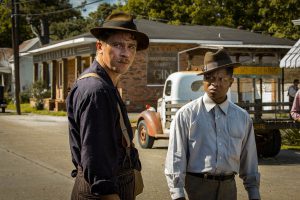 If Get Out’s message about racism and the plight of being a black man in America was too oblique for you, maybe Mudbound is more your cup of tea. There’s nothing subtle or hidden in Dee Rees’ period drama set in wartime Mississippi about two men on either side of the color divide. Mudbound is brutal and beautiful, haunting and harrowing. It is the story of two families, one white, one black, who live on the same patch of land, and each have a son recently returned from war. While their geographic circumstances may be similar, the emotional paths each family travels reflect the times as the American black experience is shown in all its beauty and brutality.

Director/co-writer Rees is a vibrant new voice in film, having made a splash with her film debut in 2011 with the critically acclaimed Pariah. Now given a much larger budget and platform (Mudbound was released in theatres and also is available on the Netflix platform as Netflix branches into film distribution), Rees delivers on her promise with this searing examination of race relations in the Mississippi delta. Her voice, as an openly gay black woman, is one that needs to be heard and Mudbound is powerful and compelling.

Starring Garrett Hedlund, Jason Mitchell, Carey Mulligan and Jason Clarke with a noticeably impressive performance by Mary J. Blige, Mudbound is powerful all the way around, with Mitchell and Hedlund doing most of the heavy lifting. The cinematography by Rachel Morrison is stunning, but it is Rees’ powerful, no-nonsense (and very little sentimentality) direction that makes Mudbound the compelling experience that it is.

This country has a bleak and sometimes difficult history, but every story needs to be heard. Mudbound may be harsh and brutal at times, but its unflinching honesty and emotional relevance are an essential part of the fabric of who we are.