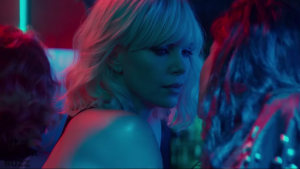 There are so many things I loved about Atomic Blonde:

1. It’s a female-driven action movie that’s not based on a comic-book.

5. The only sex scene is a same-sex one

It’s as if they said to themselves, “let’s make a movie for Catherine.”

So, all that being true, how on earth could I not love it? Well, I did love it…sort of. Once I realized that Atomic Blonde was not meant to be taken too seriously, or even literally, I just sat back and took the ride. And I have to say it was quite a thrilling roller-coaster, even with its flaws.

The biggest flaws, I’m afraid, have to do with the director, David Leitch. Leitch’s claim to fame is not as a director but as a stunt double (mainly for Brad Pitt) and as stunt coordinator, for such films as Ninja Assassin, 300, and all the Bourne movies. So, with such a power-packed resume, I shouldn’t have been surprised that his first major motion picture as a director is more about intricately-designed and impeccably-produced fight scenes than anything else. Don’t get me wrong, the fight scenes are impressive, but the problem is they completely overwhelm the movie. I paid money to see Charlize Theron play an international spy. What I got was Charlize Theron kicking, punching and hand-to-hand combat-ing through a 2-hour movie. Again, not a totally bad thing, but still not enough to make up for the convoluted story and misguided plot twists.

So, to set the scene, Theron plays MI6 superspy Lorraine Broughton (movie is based on the Oni Press graphic novel series “The Coldest City” written by Anthony Johnston) who is brought in to Cold War Berlin (both East and West) in 1989 (before the wall fell) to assist another spy, already embedded in Berlin (played by James McAvoy), recover a list of Allied undercover spies that has fallen into Soviet hands. (Boy, they really need to keep a better watch on these master lists of spies, they keep falling into the wrong hands….). I won’t spoil anything else about the story because it would ruin it, and, to be honest, it’s not really important anyway.

Atomic Blonde is all about three things: style, action and Charlize Theron. If you like just one of those three things, you’ll be happy. If you like all three together, this is your Best Picture.

Leitch has stylized this film to within an inch of its celluloid (digital?) life. I’m not surprised in the least to see on his IMDB page that he’s currently directing Deadpool 2, because, honestly, Deadpool was the first movie I thought of when Atomic Blonde started. It’s got much of the same flair and sensibility, but, sadly, none of the charm. But still it is very slick, edgy and vibrant.

But there is only so much you can give over to style. I’m about to say a sentence I never thought I’d ever say: the director over-indulged himself in shooting Charlize Theron. Normally, too much Charlize Theron is never a bad thing, but Leitch’s prolonged close-ups, extended tracking shots of her walking and shooting her in a seemingly endless moody glam pose grew tiresome after a while. Add to that the fact that most of the movie is dialogue-free and it feels like we are getting too much of one Charlize and not enough of another.

But, yes, this does feel like nit-picking. Let’s appreciate Atomic Blonde for what it is: a summer action spectacular with a female heroine at its center. Until there are as many of those as there are action movies starring men, I will be more lenient, more forgiving and more appreciative of how good Atomic Blonde is and how desperately we need more just like it.