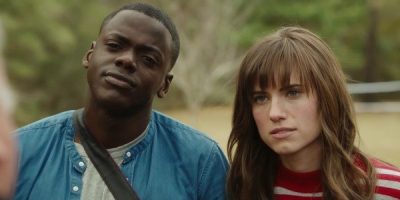 Public Service Announcement:
If you, like me, are really curious and interested to see the new movie Get Out because of its phenomenal reviews and record-breaking box office numbers, but are nervous to actually go to the theatre to see it because it’s a horror movie and you just don’t do horror, well, I’m here to tell you: Get In.

Get Out’s writer/director, Jordan Peele, just made history by being the first African-American director whose debut film crossed the $100 million mark in box office earnings. And it reached that milestone in just 16 days. A little film that cost only $4.5 million to make, has no big names in it and is labeled a “horror-satire” with shades of social commentary has already made $100 million dollars two weeks in? That’s almost as unheard-of as a $1.5 million movie by a black director, with an all-black cast and a gay storyline winning Best Picture at the Oscars. Oh, wait….

So Get Out is making history. That’s great, but that’s not even the best story about this movie. The best part about Get Out is….it’s really good.

Get Out is a horror movie, but it’s the same kind of horror movie that Whatever Happened to Baby Jane was or any episode of the fantastic Netflix series Black Mirror. The “horror” here is not blood and guts but tension, anxiety and build-up. Get Out begins building from the first scene and the payoff is one incredibly tense scene after another, each one providing yet another piece of the puzzle for the audience, culminating in a massively well-done climax.

But first, Get Out is a perfectly-paced movie about human interactions and is a bonafide satire of race relations. The basic premise here is a white woman, played by Allison Williams (Girls), is taking her black boyfriend of 4 months, played by the excellent Daniel Kaluuya (Black Mirror), home to meet her parents (Bradley Whitford and Catherine Keener), who live in an affluent, upscale and very white neighborhood upstate. Neighborhood is a generous word, as their house is literally in the middle of the woods, the nearest neighbor miles away.

Obviously, the set up could be horror or comedy (Meet the Fockers or Cabin in the Woods?), but in the hands of Peele, most famously known as one half of the duo Key & Peele, it gives us both—sometimes at the same moment. He eschews clichés even as he embraces them, and allows us to laugh at our common understanding of humanity and its many flaws—especially racism. Stereotypes abound, but are used in such a way to make us laugh—and squirm.

I certainly will not reveal any more of the plot or what causes the tension to build and break, but I will say that Get Out is a masterfully done, hilarious and tension-filled delight of a film. It is engrossing, captivating, clever, and, ultimately, the perfect movie at the perfect time.

As for the “horror” part? Full disclosure: there is liberal use of jump scares, but that’s about it for the sensitive types (like me). No axes, no chainsaws, no scary masks. Get Out gets to you the old-fashioned way: with your brain.