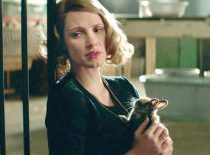 Just when you thought there were no more horrible stories to tell about the Nazi atrocities during World War II, we get The Zookeeper’s Wife, a movie based on the best-selling book by Diane Ackerman, which tells a familiar (but still harrowing) story of civilians who tried to help Jews escape the Nazis, and also reveals yet another subset of victims of the Third Reich: animals.

I’m a huge animal lover, so I was resistant to see The Zookeeper’s Wife. The movie tells the true story of Antonina and Jan Zabinski, a Warsaw couple who run the city’s zoo. When the Nazis invade Poland in September, 1939, the zoo is bombed and the animals are, well, obviously, “displaced,” one way or another. I was prepared for this, I tried my best to steel myself, but, even with my eyes closed for about 6 minutes, it was still quite traumatic.

And then, once the destruction of the zoo had completed, the movie enters the main part of the story: the brave couple who smuggled Jews out of the nearby ghetto and hid them in their still-functioning zoo, right under the Nazi noses. It is a truly heroic tale of courage and compassion, but nonetheless still harrowing and tragic. Starring the always-magnificent Jessica Chastain in the titular role and the understatedly powerful Johan Heldenbergh as her husband, The Zookeeper’s Wife is one gut punch after another, but is still a moving story of compassion and goodness in the face of evil. It never panders and, even though it’s treading over very familiar territory, it still feels fresh. What keeps The Zookeeper’s Wife from being yet another hiding-from-the-Nazis story is the focus it places on the relationship between Antonina and Jan, and the powerful performances from Chastain and Heldenbergh. Focusing on them provides a grounded center to the film and a welcome relief from all the horrors swirling around them. Director Niki Caro and screenwriter Angela Workman work to establish these characters, especially Chastain’s, as determined and strong, independent and resilient.

It is most definitely worth noting here that The Zookeeper’s Wife is a woman-centered film which is directed, written and co-produced by women. It may not seem like a big thing, but it really is. While it is worth supporting for that alone, the movie is also worth your time if you are looking for a moving story with great performances. But make sure you have your Kleenex ready, especially if you have that ultra-soft spot for animals.