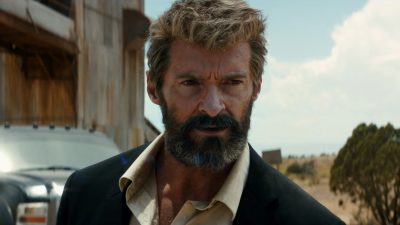 Old superheroes never die, they just fade away…. Or get recast so a whole new franchise can begin anew with a younger actor, ignoring all movies that had come before it.

One thing I will give to Logan, the newest (and last—we think) installment in the Wolverine series of films from the X-Men superhero franchise, is that 20th Century Fox actually lets its tentpole lead character get old. Wolverine is played by Hugh Jackman, and has been since he first appeared on screen in 2000 in the original X-Men movie. So that’s 17 years of the same actor playing the same character…almost unheard of in Hollywood, the place where they’ve replaced Spider-Man 3 times, Superman 7 times and Batman 5 times. And the fact that Hugh Jackman was already 32 when he first appeared as Wolverine meant that it wasn’t about attracting the young audience to the character and his story, but it was truly about the actor, character and arc. And that is definitely to be applauded.

I have to admit here, while I’m a huge fan of the X-Men series, I did not keep up with all the spinoffs, including the two previous Wolverine stand-alones, X-Men Origins: Wolverine (2009) or The Wolverine (2013). So even though I was familiar with the character, I wasn’t invested in his backstory or emotional journey that perhaps could have made the Logan experience more fulfilling. But still, I knew enough of both the character and the franchise to get the idea.

Logan is clearly a farewell to a beloved character and, while it definitely has its moments of quiet and character nuance that breaks away from the traditional non-stop noise and action, it is still too tedious and one note to be the right kind of send-off for such a vibrant film presence. Directed by James Mangold and written by Mangold, Scott Frank and Michael Green, Logan focuses on an aging, lost and broken-down man who happens to be invincible. His life consists of hiding from his past and who he is, as well as being a caretaker to his elderly mentor, who is forced to be kept hidden away in an abandoned junkyard across the Mexican border. It is hard to see Logan—the Wolverine—so old and broken, for sure, but to see him living with no purpose was even harder.

While I will not reveal any plot points or even the story of Logan, I will note that the film feels (and is) like a road trip movie and plays almost like a western instead of a classic modern superhero flick. In fact, when I note that director Mangold is responsible for my favorite western ever, 2007’s 3:10 to Yuma, it becomes clear that the pace, texture, story and character coloring that made that film so effective is what works here. Logan is like a classic western, with a hero in need of redemption who reluctantly gets brought back into the fray against villains who threaten the only things that matter to him. In this sense, Logan works exceedingly well, partially because Jackman is a good actor and carries Logan’s pain and backstory with obvious understanding, but also because the structure of the movie allows the audience to come along and become invested in his pursuit.

What doesn’t work, however, is that it eventually wears out its welcome and becomes just another tedious superhero movie, with an eyball-rolling amount of violence (be warned: there’s a lot and it’s graphic) and relentless bad-guy killing. And while Jackman certainly has the chops to give Wolverine some real personality (we know—we’ve seen it), he is sadly way too one-note here, looking miserable and cranky at every moment, on top of the aging makeup that really makes him look awful. It’s one thing to know that an actor wants out of playing a character, it’s another when you can see it on screen.

There are some good supporting performances in Logan, most notably Stephen Merchant, playing a serious character in a real departure for the funnyman (and doing a really good job), and Boyd Holbrook, who turns a colorless villain into one of the best moustache-twirling bad guys I’ve seen since, well, Ben Foster in 3:10 to Yuma. Richard E. Grant, however, is a disasterously miscast bad guy and really detracts from the film.

But, in the end, is Logan a fitting farewell to such an enigmatic character? Well, that answer is up to each viewer. For me, while the movie works as a western-style soul-avenging journey, in the end it feels like just another slash-‘em-up blood-fest whose only purpose is to get rid of the past and set up the future: as in keep the franchise going. Out with the old, in with the new. Some things never change.