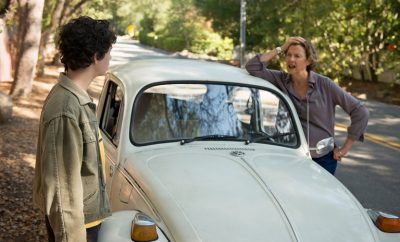 Writer/Director Mike Mills’ acclaimed 2010 film, Beginners, which brought Christopher Plummer an Oscar for Best Supporting Actor, was, by his own admission, a movie about Mills’ father. Now, his latest project, 20th Century Women, is an homage to his maternal side. Starring Annette Bening in the role inspired by Mills’ mother, 20th Century Women is a tender, insightful and charming movie about mothers, sons, friendship and what the world was like in the time just before the internet, AIDS and Reagan shaped it. And, just like Beginners, Oscar may come knocking again, this time for Bening, who shines in perhaps the best role of her career.

Set in Santa Barbara, California in the late ‘70s, 20th Century Women stars Bening as Dorothea, a divorcee who is raising her 15-year old son Jamie in a turn of the century boarding house. When Dorothea worries that Jamie may need more influences in his life to shape him into a well-rounded adult, she seeks the assistance of two of her boarders, eclectic artist Abbie (Greta Gerwig) and Jamie’s world-weary best friend, Julie (Elle Fanning). Between them, Dorothea, Abbie and Julie all know different sides of Jamie and each find ways to teach him about life, including women, sex and the ways of the world. Jamie, however, may not be in as much need of mentoring/teaching as the women in his life may think, as he is there for them just as much as they are for him.

20th Century Women may seem to be a movie about how to mold a boy to be a good, understanding and respectful man, but it is so much more than that. Mills crafted a world inspired by his own growing up, and, because of the detail, nuance and texture that provides, 20th Century Women feels and is more intimate and, strangely enough, more universal. The title itself belies this movie’s secret recipe: our lives are a quilt of experiences and history and each person’s contribution to the world helps to shape it and to shape our understanding of it. We are a product of the time in which we are born and live and the outside influences that affect our lives are indelibly etched into our being.

Mills perfectly captures time and place, but, more important than that, he captures perfectly the essence of youth: innocence, curiosity and longing. Music, sexual awareness, confusion and a widening understanding of the world all take center stage in a teenage life at one point or another, and 20th Century Women takes a wonderful snapshot of every emotion that comes with them.

The central performances in 20th Century Women are all vibrant, moving and powerful. It begins with Bening, who finds a sadness in her character that belies the colored and vibrant life her character has lived. She is warm yet distant, strong yet vulnerable. It is a portrait of a mother desperate not to lose her child to the world but, at the same time, wants to shape his wings so he can fly high and far. Newcomer Lucas Jade Zumann, who plays Jamie, is transcendent in his burgeoning grasp of the world around him. Zumann is sweet and charming, but is also able to tap into his character’s myriad emotions to create a believable and sensitive young adult. Gerwig and Fanning are both colorful and strong in fleshed-out performances that defy the word “supporting.” If there ever was an ensemble movie, 20th Century Women is it.

But, in the end, the joy and strength of 20th Century Women is Mills’ intimate and layered screenplay. Just like the characters themselves, the script roams free, filling in all the swirling colors of the world and expressing a time and place that might have just been the last when human connection was tactile and fearless. Mills creates a thoroughly enjoyable movie to watch, from the music to the setting to the funny and interesting characters. Not all movies need to be grand spectacles to be effective. Sometimes, all it takes is a tapestry of emotions and the right words said by the right actors.