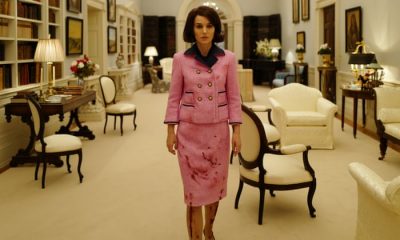 It’s a perspective that we hadn’t yet quite seen, that of Jackie Kennedy in the wake of her husband President John F. Kennedy’s assassination in October of 1963. Director Pablo Larain’s movie Jackie attempts to take us inside the world and mind of Mrs. Kennedy in the hours before, during and after the seminal moment in Dallas that altered the course of the country’s history. Starring Natalie Portman as the First Lady, Jackie is an unflinching examination of life in a political fishbowl, where a personal tragedy can be turned into a national spectacle and manipulated for emotional and psychological effect. It really is a subject matter that could define compelling, if only the movie itself weren’t trying so hard to create its own kind of psychological warfare on the audience.

There really is nothing worse than a director who puts his own desire to make “art” above the narrative needs of the movie he’s making. In Larain’s case, Jackie is so painfully paced and self-aware that it detracts from any enjoyment or appreciation of the tale it’s trying to tell. Close-ups of Portman’s face dominate the screen time and, while she’s a strong actress and does the best she can with the portrayal of Mrs. Kennedy, even Portman can’t overcome the overexposure and the painfully calculated decision to communicate emotion and story through slight facial expression and brooding music cues.

Speaking of the music, composer Mica Levi has given us one of the truly depressing and heavy-handed scores I’ve heard in a movie in a long time. When you pair the pace of this film with the interminably morose music, there’s nothing left that can save you from the pit of despair that watching this movie throws you into.

But it is Larain’s direction, above all else, that makes the viewing experience of Jackie one of the low points of the cinematic year for me. Not only was a compelling subject and a truly talented actress laid to waste by a director’s desire to be different and make a movie that is clearly more about his own “vision” and style than telling a story, but the audience’s sincere desire to get to know this person and legitimately experience one of the great tragedies in our country’s history through her unique perspective was cast aside in favor of a pretentious filmmaker’s attempt at art.