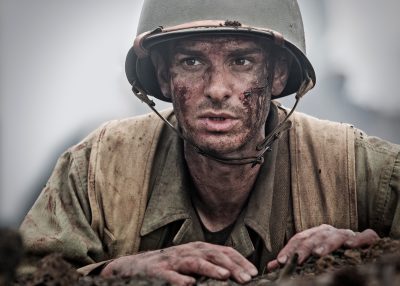 I’ll be the first to admit I was hesitant to watch Hacksaw Ridge, not only because I didn’t want to, implicitly or explicitly, support director Mel Gibson, but because I truthfully am not a fan of Gibson’s movies. I didn’t like his 1995 Oscar Best Picture-winning film Braveheart, and I wasn’t interested in either of his two most recent films, 2004’s The Passion of the Christ or 2006’s Apocalypto. His style of filmmaking is just a little too aggressive for me, too preachy and too masculine.

But when I saw the subject of his newest film, Hacksaw Ridge, it piqued my interest. The story of WWII Army medic Desmond Doss, Hacksaw Ridge is the true tale of how Doss became a war hero while staying true to his religious principles: he refused to ever touch a gun or take a life. His heroics during the battle for Okinawa, the bloodiest battle of the war, earned him the first Medal of Honor awarded to someone who never fired a shot.

The story is almost too incredible to believe, but totally intriguing to watch. Gibson’s aggressive style of filmmaking actually lends itself to a war movie, and even though the war movie tropes run amuck here, Hacksaw Ridge still is able to come around to be watchable, even fascinating. It helps that star Andrew Garfield is so good as Doss, sweet and vulnerable, yet rock solid to the core. He makes the first half of the movie tolerable—without him, it’s just a cliché-laden and derivative run-of-the-mill war movie. But the second half, which takes place during the titular bloody battle, is worth the price of admission, despite the graphic nature of the violence, which truly is not for the feint of heart. Gibson’s direction gets you right up in the action and the war scenes are truly breathtaking.

It is the story that makes and keeps Hacksaw Ridge watchable, and, despite all the war movie clichés and rampant predictability, it’s still a movie worth seeing, especially if you have the slightest interest in war history. Mel Gibson may not be your cup o’tea, but his bag of tricks do work for a certain kind of movie, and Hacksaw Ridge is it.