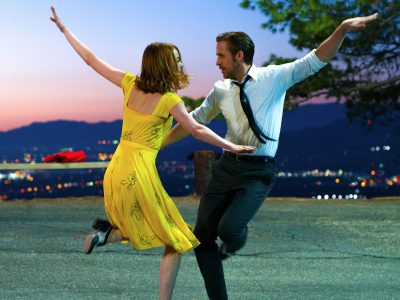 The prevailing narrative from reviewers and journalists as they approach the new movie, La La Land from director Damien Chazelle, is that Chazelle is reviving the movie musical, moving a classic genre to the modern era, in the hopes of creating renewed interest and passion in what was once a staple of the studio industry. While all that is true, I feel, after having finally seen it for myself, that everyone is missing the real point with this movie. La La Land is not just a musical for the modern era, it is a movie that speaks specifically to the modern era and is perhaps the bravest example of guerrilla filmmaking I’ve seen in a long time. What Chazelle has rediscovered on screen is something we all need so desperately and seemed to have forgotten altogether: optimism.

From the opening sequence (which is staggering) to the addictive chemistry between its two stars, Ryan Gosling and Emma Stone, La La Land is so passionately brazen in its desire to make you feel something that it cannot be denied. It works on every level and you truly have never seen anything like it. It glows with a retro vibe that is intoxicating, and I found myself wishing this movie could seep into my bones and stay there.

We already knew Chazelle was a passionate filmmaker, as his debut film, Whiplash, burst into our consciousness with a rattling drumbeat. But where Whiplash was dark and malevolent, La La Land is vibrant and hopeful, putting a smile on your face and the proverbial song in your heart.

La La Land is set in modern-day Los Angeles and focuses on two struggling artists, Sebastian and Mia, played by Gosling and Stone. Sebastian is a piano player who dreams of opening his own jazz club one day and Mia is an aspiring actress who suffers through one brutal audition after another. They inevitably come together, but in a way that will make any true romantic literally swoon. Chazelle sucks us in with the pairing of two of Hollywood’s biggest young stars, but then changes it up by giving us a classic old-Hollywood movie that plays like a romantic daydream, with just enough classic Hollywood charm to melt even the coldest hearts.

It’s hard not to cheer at every turn with this movie, as it is packed with smile-inducing moments, from the undeniable pleasure of watching Gosling and Stone shine, both individually and as a pair. Each actor is so massively talented and endearing, you remember why there are movie stars in the first place. They sing, they dance and they bring Chazelle’s touching and relatable script (and composer Justin Hurwitz’ hummable tunes) to life with grace and warmth. And as for the movie that Chazelle builds around their magnificent performances, it is one full of color, humor and heart, with costumes, production design and, yes, music, that will make it hard to watch another movie for a while.

If you are in any way a romantic, love old musicals, love great performances, love hope or optimism, or just love good movies, you must rush out to see La La Land as soon as you can. Some movies allow you to escape, and then there are some that just make you feel something you forgot you needed to feel. La La Land is for all the lovers, the dreamers…and me.