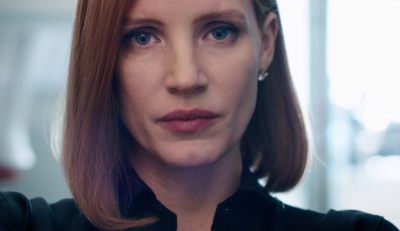 The Tree of Life is a lot like Tootsie to me. Let me explain.

When I saw Tootsie for the first time back in 1982, I was struck by the powerful and memorable performance of one Jessica Lange—an impact that lasts to this day. Nearly the exact same revelatory feeling came over me when I saw Jessica Chastain in The Tree of Life nearly 30 years later. Her performance and presence in that film was luminous, powerful and, yes, memorable. Chastain proceeded to validate my first impression with a string of incredible performances since, including Take Shelter, The Debt, The Help, Lawless, Zero Dark Thirty, The Disappearance of Eleanor Rigby, A Most Violent Year and Crimson Peak. Two Oscar nominations already and more surely to come, Chastain has proven herself a force to be reckoned with as one of the top actresses in Hollywood.

And, in 2016, following closely on the heels of Amy Adams, another actress with an impressive resume, who top-lined a movie all by herself to critical and commercial acclaim with Arrival, Jessica Chastain carries the drama Miss Sloane. Considering Chastain’s pedigree and the December opening, could Miss Sloane be as strong for Chastain as Arrival was for Adams, even portending Oscar?

The comparisons between Arrival and Miss Sloane end, sadly, at the fact that they are both RARE occurrences of a woman carrying the movie in a non-romantic or fantasy role. Other than a savagely talented actress in the lead, Arrival and Miss Sloane have absolutely nothing else in common. Arrival is inspired filmmaking, with nuanced direction, taut and smart screenplay and imagination. Miss Sloane, on the other hand, is a painfully in-your-face instrument of destruction—destruction, that is, of subtlety and delicacy.

It’d be one thing if the makers of Miss Sloane felt they had the honor and great luck to have discovered this fantastic unknown actress and gave her this larger-than-life featured role that would make everyone sit up and take notice. But guess what? We already know Jessica Chastain. And we know how good she is. So why have you given her a shoddy, bully pulpit screenplay and direction that makes you want to scream?

Miss Sloane is about a powerful Washington, D.C. lobbyist (Chastain) and how she can be just as good as a man! She can be cutthroat, unemotional and a jerk! Hey, isn’t equality great? But, wait, she’s not just a lobbyist, she’s lobbying for a gun control bill. So that makes her a virtuous lobbyist, right? Ends justify the means, right? Why look elsewhere for a sermon on ethics and political correctness, we’ve got it all right here! Geez, just shoot me. Sorry, wrong choice of words.

Yes, in this political climate, the subject is very timely. But it also feels cheaply manipulative. First-time screenwriter (no surprise there) Jonathan Perera creates the most over-the-top (and unbelievable) story machinations that are supposed to elicit high drama but come off more as a soap opera, with all the moustache-twirling that comes with it. Nothing is believeable, and I’ve heard the world of Washington lobbying is truly unbelievable. Perera chooses to create one-dimensional characters and a Reader’s Digest-depth story with dime novel twists and expects us to be impressed. We’re not. Perera is an Aaron Sorkin wannabe who is trying too hard to be both insightful and dramatic. It doesn’t work.

The truly sad part about all of this? The wasted talent. Starting with director John Madden, who is no slouch (and probably why the incredible array of talented actors in the movie agreed to do the film in the first place). He did, after all, direct a Best Picture Oscar winner in Shakespeare in Love, so he’s got to know a thing or two. Too bad none of his talents are on display here. The characterizations are scenery-chewing to say the least and the whole vibe of the movie is painfully obvious. Let’s just say subtlety does not rule the day in Miss Sloane.

As for the acting, well, there certainly is no shortage of talent there either. Chastain is supported by an impressive ensemble, from Mark Strong to Michael Stuhlbarg to John Lithgow to Sam Waterston. They all, just like Chastain, do the best they can, but the stilted direction and the teach-me-a-lesson screenplay force them each into caricature.

As for Jessica Chastain, Miss Sloane is all about her. And not in a good way. She’s in every scene and, in every scene, she is loud, obnoxious and extremely over-the-top. There are no colors in her performance, it’s as bold and annoying as her bright red lipstick, which also plays a central role in the film. Speaking of looks, the best thing I can say about Miss Sloane is that Chastain sure does look good. Maybe this is why she took the part in the first place. She is dressed to the absolute nines in every scene and her makeup and hair is perfect. She looks like she stepped out of the pages of Vogue. Note to self: when you spend more time noticing what the actors are wearing than what they’re saying, you’ve got a problem.

So I guess I’ve made my point about Miss Sloane. But what I—and you—need to remember here is that every actress has a miss-step or two in their career, especially early on, and Jessica Chastain is no exception. If you have not had the pleasure of seeing a Chastain performance yet, do NOT let Miss Sloane be your introduction. Trust me when I say she’s so much better than this movie. We all are.