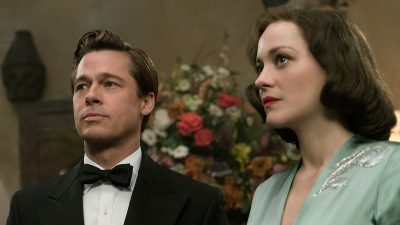 Robert Zemeckis is an extremely admirable director. After all, he brought us all 3 Back to the Future movies, the groundbreaking Who Framed Roger Rabbit? as well as the monumentally successful Cast Away and Forrest Gump, for which he won the Oscar for Best Director. His movies are entertaining, heartfelt and, most of all, cutting edge. He is a masterful visual effect director, able to seamlessly meld effect with story. Even his dramatic movies, like Contact and Flight, are built on some sort of visual effect to draw you into the story and flesh out the characters. All of this is well and good, if you like to see movies where reality blurs with fantasy, where schmaltz and sentimentality rule the day and where tricks of the eye are par for the course.

Unfortunately, none of Zemeckis’ patented tools help him in his latest effort, Allied, starring Brad Pitt and Marion Cotillard. Allied is supposed to be a dramatic spy movie, with plenty of romance and mystery thrown in, but, in Zemeckis’ hands, it comes off as a—I’m actually not sure what. Because Zemeckis is so good at the fantastical, it comes off as completely wrong when he tries his hand at legit drama that doesn’t need or benefit from special effects.

In Allied, Pitt and Cotillard play allied spies behind enemy lines in World War II. She is French and he is Canadian, and they are both assigned to assassinate a major Nazi officer in Casablanca. Their cover is to be husband and wife, even though they’ve never met before. Of course, as it would be, they end up falling in love and move to England, where they have a baby girl and live their lives. Even though the war still rages around them, they manage to be happy, until the spectre of doubt is cast over them. I won’t delve too deeply into the story twists that happen, but I will say that in the hands of any other director, this movie just might have been stimulating and gripping. Pitt and Cotillard are both massively capable actors who can pull off just about anything, but here they are left virtually rudderless and their performances are two of their least enthralling that I’ve seen. For his part, Pitt comes off as completely wooden and Cotillard, for all her depth and texture, creates a character here who is oddly cold and uninteresting.

It’s no coincidence, I’m sure, that the events that set this movie (and love story) in motion take place in Casablanca. I’m sure everyone involved with the movie were hoping and maybe even trying to make a movie that had every characteristic of the Humphrey Bogart/Ingrid Bergman classic, which is not only a classic war movie, but a classic romance. Allied comes nowhere near either and the blatant attempt to tie it to the original only heightens its own shortcomings.

Again, Zemeckis is just all wrong here. The tone and pacing of this movie are completely nonsensical for the subject matter. Most of the movie is slow and somewhat romanticized, but never in a compelling or passionate way. I felt, during the whole movie, that so much emphasis was placed on costumes, production design and, yes, visual effects, that the two things that were necessary for us to actually be invested in this movie were completely overlooked: character and story. There is story at the beginning of the movie and story at the end, but everything inbetween seemed to just hover in a fantastical haze, and the disconnect is quite jarring. And as for character, I never once felt invested in either one.

I’m wondering if Zemeckis even knew what movie he was trying to make. There have been obvious comparisons to Casablanca and to Mr. & Mrs. Smith, but Allied doesn’t have any of the texture of the former or the chemistry of the latter. Allied is just a confusing mess that left me scratching my head.

Zemeckis may be able to make a character out of a volleyball, but he sure doesn’t know how to make a romantic spy thriller. I guess even the great ones have their limitations.