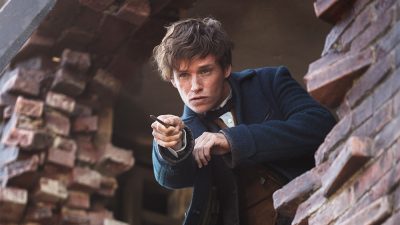 What on earth do you do when you run out of Harry Potter movies? Well, fortunately for Warner Bros and for movie fans everywhere, Harry Potter creator and author J.K. Rowling says just because Harry is gone, it doesn’t mean his universe isn’t still alive and well.

Fantastic Beasts and Where to Find Them is the first in probably a long line of new Rowling-authored movies that are inspired by Harry Potter’s magical world, sharing a common universe and some common elements and characters, but, basically a whole new franchise. If movies had such things as spin-offs, this would be Harry’s.

The difference? Spinoffs rarely are as good as their parent and, in this case, Fantastic Beasts and Where to Find Them may be completely entertaining, but it comes nowhere near the magical allure of the original eight Harry Potter films.

Now don’t get me wrong, Fantastic Beasts is a genuinely worthwhile cinematic experience. Eddie Redmayne plays Newt Scamander, and he is some sort of magical zoologist, which means we get to see a whole batch of new creatures, which are absolutely delightful. Also delightful is the setting of Fantastic Beasts. We are far from London here, as it is set in 1920s New York City and the whole steampunk atmosphere works really well, visually, with our magical tale.

And it is, sadly, the tale itself that could use a little more imagination. Of course, we all know this first movie is just setting us up for future movies, so it couldn’t flesh out too much too soon, but it would have been nice to have given us just a little bit more to chew on. Instead, the movie gets by on its charm, visual effects and warm familiarity, along with a few charismatic new characters.

Redmayne is good as the quiet, unassuming hero, and Katherine Waterston is serviceable as a member of the Ministry of Magic who is tasked with keeping an eye on the suspicious Salamander. But, oddly enough, the best character in the movie isn’t magical at all. Dan Fogler steals the movie—even from the brilliantly-rendered magical creatures—as a muggle (non-magical human) who is swept up in all of Newt’s shenanigans.

Overall, director David Yates and screenwriter Rowling, both alumni of the Harry Potter School of Cinematic Magic, have a charming and fine first installment in Fantastic Beasts and Where to Find Them, I only wish it could have pushed the envelope just a little more. Harry is gone but never forgotten.