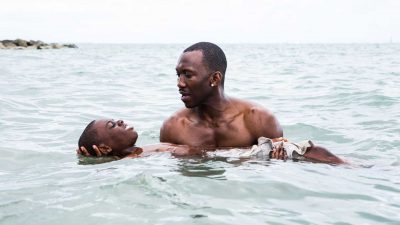 I will never and would never pretend to know anything about the experience of being black in America, but that is why we have movies. Through the visionary and compelling stories that are told on our screens, we can—all of us—move a little closer to a common human understanding of other races and cultures, even in the slightest way.

It would be far too simplistic, however, to paint with one single brush the experience of watching the film Moonlight, written and directed by Barry Jenkins. While it is a movie set in and focused on a lower-income black community in Miami, the story is not about socio-economic woes, but a true character study of one boy’s self-discovery and journey to manhood. Moonlight truly transcends socio-political commentary and evolves into a poignant and moving portrait of a three-dimensional human being who is just trying to figure things out. Even more than that, Moonlight is a movie about the connections we make with each other, bad or good, and the long-term significances they can have on our lives.

If you’ve never heard of Moonlight, you’re probably not alone. A classic example of an independent film that is birthed and nourished through the film festival system, Barry Jenkins’s small but powerful film wowed critics and audiences alike at many festivals, including Toronto and London and won the Special Jury Award for Ensemble Performance from the 2016 Gotham Awards, a fete that traditionally honors the most acclaimed indies of the year. Moonlight is the second film from writer/director Barry Jenkins (Medicine for Melancholy) and stars Alex Hibbert, Ashton Sanders, Trevante Rhodes, Naomie Harris and Mahershala Ali. You’ve probably never heard of any of them, but if I point out that Naomie Harris also played Moneypenny in the last two James Bond films and Mahershala Ali plays Remy Danton on House of Cards and Cottonmouth in Luke Cage, you might recognize them.

But we are far from Luke Cage and James Bond territory here. Moonlight is a small and personal film, as far away from studio box office bait as you can get. There are no production values to speak of, and the single-camera hand-held style that Jenkins prefers most of the time, while more intimate, tends to distract and sometimes detract from the story. But, still, it is character development that is the beating heart of this film and is truly moving and magnificent. We watch the character of Chiron grow up, seeing him at three different ages and times in his life (played by three different actors—perfectly cast), a black version of Boyhood—but one that is so much more meaningful and complex. I will leave the details of Chiron’s life experiences to the sublime joy of watching this film, but I will say that the depth of human connection and self-discovery are themes deeply embedded in this film and are both stirring and satisfying.

I highly recommend seeking Moonlight out. There are no bells and whistles here, no special effects or expensive production design, but what I will promise you is a character study worth your time and a movie experience perhaps unlike any other you may have known. From the performances, which are all first-rate, to the humanity layered throughout, Moonlight is an indie gem that deserves all the hoopla and life of a studio blockbuster.