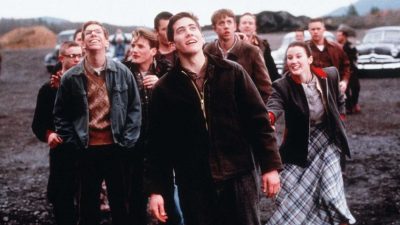 Most movies these days make me scratch my head and wonder if anyone even knows what a good movie should look like anymore. Sure, you can always count on the big names and the big stars to deliver, but the other 90% of releases are nothing if not mindless, dreary, insulting and derivative. But hope is not lost.

October Sky has renewed my faith in Hollywood.

This quiet, unassuming film, made by B-level Hollywood talent and starring unfamiliar faces, is certainly not an Oscar winner, nor is it one for the ages. But what it is is a reminder that movies can be pure heart. A movie can be worthwhile without the big names, the big effects and the big budgets. A movie can still just be good.

October Sky, directed by Joe Johnston (Jumanji, The Rocketeer), is based on the true-life story of Homer Hickam, Jr., who grew up in Coalwood, West Virginia. The movie begins in 1957 when the Russians launch Sputnik into space, triggering the space war and intensifying the Cold War. Most residents of Coalwood, a town built on and sustained by the local coal mine, see Sputnik as a novelty or as a threat, but offer no real second thoughts about it, for there are more important things to do. But seventeen-year-old Homer, who is too small to earn a football scholarship, looks to the sky to find a way out of being a coal miner, which seems to be his preordained destiny.

At first curious as to how a rocket works, Homer and his friends try their hands at rocket making, to disastrous early results. After learning from their supportive teacher, Miss Riley (Laura Dern), that their rocket-making could enter them in the local science fair, with winners going to national finals (and college scholarships the prize), the boys, affectionately known in Coalwood as The Rocket Boys, embark on the adventure of their lives trying to build the perfect rocket.

Some may find it schmaltzy, some may find it boring, but my interest never waned. My desire to see the story through, no matter how predictable it was, is what matters. This is a film that plays on our childhood dreams, that stirs our imagination and reflects the potential most of us deny we even possess. October Sky just makes you feel good. Sure, it’s predictable and at times manipulative, but the difference here is that you feel and you know where its heart is. This movie made me want to go to the library and learn something new. Every schoolteacher should take their class to see this film about the possibilities of aiming high, of learning, but, most important, the possibilities of being young.

Jake Gyllenhaal, who plays Homer and who is in almost every scene, is a joy to watch. He delivers the power of a kid just wanting to get out, yet, at the same time, his quiet submission to his unsupportive father reflects the inherent respect of the place and time. Gyllenhaal is certainly a breath of fresh air in the sea of rising teenage stars these days, where negativity seems to be the theme.

The supporting cast is universally strong, from Homer’s Rocket Boy buddies to his strong-willed parents. Laura Dern is fine and the only real star in the film, but her presence is almost detrimental, for her idealized portrayal of Homer’s inspirational teacher is heavy-handed at times and almost takes away from the purity of Homer’s imagination.

But the occasional heavy-handedness and emotional manipulations that come at the very end of the film are easy to overlook because October Sky delivers a story with imagination, heart and all the stuff that movies used to have. Thank goodness somebody remembers how to make them!

October Sky is truly a wonderful film and well your time in this pathetic movie-going season. It reaches in and finds your heart. It tells a story and gives hope. I really don’t know what more you could want.

My rating: **** Worth paying full price