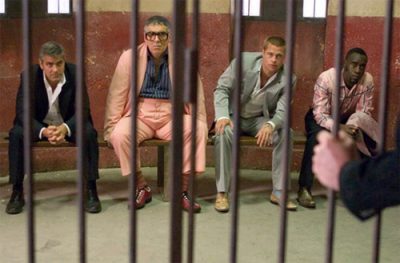 Let’s not kid ourselves. There was no great need for a sequel to Ocean’s Eleven. In fact, the original had been done so well (twice, in fact), that it was best just to let it rest. The Steven Soderbergh-directed 2001 remake of Ocean’s Eleven was a wonderful film, slick and sassy, with a great cast, a great story, and a ton of fun. But as with every wonderful thing that finds success in Hollywood, it was destined to be ruined. And ruin it they have.

Are Brad Pitt and George Clooney so hard up for cash that they needed to do this film? Did Steven Soderbergh have a few weeks to kill? It almost feels as if the only reason this film was even made—besides the obvious padding-the-coffers reason that most sequels are made in the first place—was to give all these buddies an excuse to get together, go to Italy and hang out at Clooney’s lakeside villa. There had to have been some reason to make this film other than artistic ones, because there certainly isn’t any evidence of anything artistic in this monumental disaster of a film.

Ocean’s Twelve is so bad, it would kill the careers of less-established actors. But this group truly had nothing at risk here, so it’s not surprising they took their paycheck and ran. And since it was a group effort, they knew that no one career was on the line (except maybe Soderbergh’s), so there was nothing to lose. (Is there a reason there was no publicity-blitz for this film? Hmmm…..)

And after the months of tabloid candids from the European shoot that bombarded the pages of magazines, and from all the gossip about how much fun this cast had while shooting the film, it doesn’t seem too farfetched to imagine this conversation:

George Clooney: “Hey Brad and Julia, you want to come and hang out with me at my ultra-cool Italian villa that I have over here on Lake Como?”
Brad Pitt: “Sure, George! It would be great to hang out with you again….we could play pranks on each other, like we did when we shot Ocean’s Eleven !”
Clooney: “Yeah, that was a fun time, wasn’t it? Hey, why don’t we make another one and just set it here in Europe, so we can hang out here?”
Pitt: “OK. Then I could write off my vacation!”
Julia Roberts: “Do you have a script, George?”
Clooney: “Script? Who needs a script? I’ll get Steven, we’ll hang out, we’ll have fun, and we’ll rake it in.”
Roberts: “Sounds good to me! I’m in!”

And we fell for it, suckers that we are. The fans of the first film—we, the trusting souls who gave up 2 hours during the holidays (at $10 a ticket, to add insult to injury) to be tortured by this sham, get the short shrift. OK, so some of the reviews weren’t so hot (isn’t this what critics are for—to save us from making mistakes like this?!), BUT, we said trustingly, how bad could it be? We loved the first one, and look who’s back! Even Soderbergh is back! HOW BAD COULD IT BE?

Let’s just say everyone in this film—everyone—phoned it in. There’s no other way to explain it. Soderbergh covers up the lack of a script or story by manipulating the camera so wildly that the headache you get from watching the jerky shots makes you forget that you have no idea what’s going on. Don Cheadle, Matt Damon and Bernie Mac’s performances are so low-key and bizarre, it’s almost as if they are embarrassed to be there and hope nobody will notice they’re in this film. There are so many lingering shots on the stars’ faces exchanging smirks and gazes with each other, you get the feeling that we’re the only ones not in on the joke. In fact, it is absolutely clear from the lack of any coherent story, the haphazard dialogue, the incongruent plot devices and the insulting aren’t-we-cute moments that the joke is clearly on us.

All I can say is, to Steven Soderbergh, Brad Pitt, George Clooney, Catherine Zeta-Jones, Andy Garcia, Matt Damon, Don Cheadle and Julia Roberts: shame on you.

My rating: 0 = not even worth Netflixing