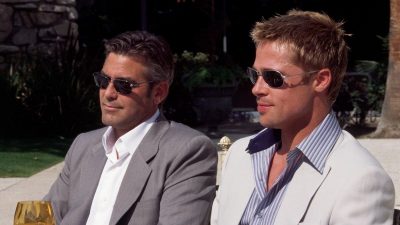 Speaking of maturity, I can’t think of anyone in Hollywood who has matured the way George Clooney has. I remember him when he could barely even hold the screen as a goofy, fish-out-of-water doofus on the television show Facts of Life in the late 80s, as that show was rapidly meeting its demise. He couldn’t act to save his life and had even less screen presence. Then he was the butt of jokes when he was cast in a serious role in the new television show ER in the early 90s. It took Clooney a few years to earn any notice at all, and what he did get was more for his good looks than for any real talent. And when he quit ER to make movies, many compared his early departure from a hit series that made him a star to the same departure made by David Caruso when he left NYPD Blue, only to completely bomb out in Hollywood, never to be heard from again. Clooney seemed destined for the same trajectory as Caruso, after all, what could he possibly really have other than good looks and the good fortune to have been on ER?

Critics found out pretty quickly that George Clooney was not going to wash out. And he was smarter than any of us thought. His choices of films has been extraordinarily smart, starting with a small film by a then-unknown director named Steven Soderbergh, Out of Sight. That film went on to be one of the most critically acclaimed films of the year and gave Clooney the respect he desired. Mixing Hollywood box-office fare, like A Perfect Storm and Batman & Robin, with smaller, more risky projects, like O Brother, Where Art Thou and Three Kings, kept Clooney busy, but, most of all, kept him in the critics’ minds.

Well, George Clooney has finally arrived. And Ocean’s Eleven is his calling card. A remake of the 1960 film starring the Rat Pack, Ocean’s Eleven is a classic heist film, all fun and style, with very little substance. But with this cast and with this director, who needs substance? Steven Soderbergh, the hottest director around today, follows up his boffo 2000, where his two films, Traffic and Erin Brockovich, earned him more acclaim than most directors have in a lifetime, with this slick, beautiful film starring some of the biggest names in showbiz today: George Clooney, Brad Pitt, Matt Damon, Andy Garcia, Julia Roberts, Don Cheadle, Elliott Gould, and Carl Reiner. Man, it must be good to be the King.

Again, I don’t want to say too much about the actual plot of Ocean’s Eleven. What makes it so much darn fun is watching it all unfold. But what I will say is the chemistry on screen between Pitt and Clooney is, well, amazing. The tales about the off-camera antics and practical jokes are becoming legendary and you can almost see that in their performances, the way they poke and prod each other, and banter like a married couple. It is magic.

Brad Pitt delivers his most enjoyable performance since A River Runs Through It, and looks the most at ease I have ever seen him. Maybe he’s maturing as well.

But this film is all Clooney, as he is growing into a modern-day Cary Grant, getting better with age. He is all at once sexy and smart, conniving and charming, and every bit the movie star. It’s films like this, and stars like this, that make the whole ordeal of going to the cineplex worthwhile.

This is no masterpiece for Soderbergh, for sure, but maybe he, just like the rest of us, just wanted to be in Clooney’s presence for a little bit and taste a bit of the aged fine wine that he is just starting to become.