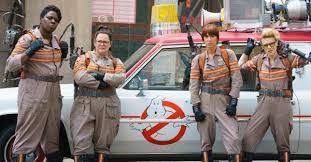 We may as well stop fighting it. Remakes, reboots and sequels, not to mention films adapted from books, TV shows, comic books, toys and video games—they are the way of the world now in Hollywood. Nobody has an original idea anymore, it’s time to just throw in the towel. All we can do is judge the result for what it is, not for where it came from. Because, if we did that each time, we’d truly go insane (you KNOW another Pokemon movie is being fired up at this very moment).

Such is my attitude as I approach the reboot/remake/reinvisioning of the ‘80s smash hit Ghostbusters. I’ll admit right off the bat that, even though I’m in my mid-40s and was a teenager when the original came out in 1984, I seem to be one of the few of my generation that does not hold a considerably tender spot in my heart for the original that starred Bill Murray and Dan Aykroyd. Of course I’ve seen it, but it was just another movie to me, nothing special. Apparently, that is quite the minority opinion, if you go by the internet, as the original Ghostbusters seems to be considered the ultimate fan favorite film of the ‘80s. And the thought of remaking it? Beyond sacrilege. Especially when you tell them the original stars will be recast by…women?!?! Oh, the horror.

But, again, none of that matters. Or, at least, none of that should matter. Right? We should be able to judge this movie on its own merits, regardless of its influence, expectation or judgments. Easier said than done. But I sure am going to try.

Ghostbusters, 2016 version, is, yes, a big summer action blockbuster tentpole movie that stars women. Hold it right there. Already, just THAT makes it something worthwhile. Or at least something noteworthy. I challenge you to think of the last time a studio put out a major movie in the middle of summer that starred four women. Not just four women, but four women over 30, all comediennes (women aren’t funny, remember) and only one of the four considered to be a legit “star” (Melissa McCarthy). In this sexist, looks-ist and ageist age of Hollywood (when isn’t it), just the fact this movie got made is a success. The fact that Sony Pictures made it their tentpole summer release? Historical. Yes, I know the main factor behind this movie’s studio support was the Ghostbusters brand, but you’ve still got to draw the teenage boys if your big summer action flick is going to succeed. This was a risk, and I applaud Sony for taking it.

So I’m sure many of you are thinking “what about Bridemaids? That was a female-driven studio movie that was a big hit!” While yes, you are right about that, what makes Bridesmaids different from Ghostbusters, at least in this comparison, is that Bridesmaids’ success came out of nowhere. It was released the second week of May, 2011, the week after Thor, and the same weekend as Priest. Yeah, I don’t remember Priest either, but it was the big release that weekend, not Bridesmaids, which should give you an idea of where Bridesmaids sat in the market share. And not only did it roll Priest, but it rolled pretty much everything else that summer. And it’s because of Bridesmaids—which proved that a female-driven film can make money—that Ghostbusters could even get made.

Which brings us full circle.

Ghostbusters 2016 is directed by Paul Feig and stars Melissa McCarthy and Kristen Wiig, all three of whom were greatly responsible for the massive success of Bridesmaids. I can tell you that while I may not be a great big fan of the original Ghostbusters, I am a HUGE fan of Bridesmaids, so I had huge hopes and expectations for the reunion of these three mega-talents. Adding to the already-stellar cast of Ghostbusters are “Saturday Night Live” veterans Kate McKinnon and Leslie Jones, two enormously funny performers in their own right. So, yes, my hopes were high.

Alas, while Ghostbusters is more than worth its weight in terms of typical summer movie fare, it falls far short of Bridesmaids’ brilliance, leaving me oh-so-slightly disappointed. As I said, I really couldn’t have cared less about all the homages to the original film (and there are many), I just wanted to be entertained. And, although the movie starts out really well, with an awesome opening scene where I found myself laughing out loud many times (those of you who know me knows it takes a LOT to get me to actually laugh out loud), I found the laughs and even giggles slowing down to mere smiles as the movie went on, as the movie seemed to almost get in its own way as it got bogged down a little too much in some cartoonish elements and lost sight of what really works: the actors. These four actors, Wiig, McCarthy, Jones and especially McKinnon, are so off the hook with their abilities to riff, emote and play off each other, when they are forced to become run-of-the-mill action heroes is where the movie loses some of its genuine appeal.

But, still, if I stop to consider all the really, REALLY bad action blockbusters I’ve seen that were so much worse by the time they got to the climactic “battle” scenes, I have to say Ghostbusters does have a unique way of holding onto its charm and personality, even when the special effects take over. And how can you not appreciate that.

So while yes, I guess I was disappointed, I think I only say that because I feel so much more could have been done, especially with this cast and this director. The writer, Katie Dippold (The Heat) did her best to make this movie stand on its own, but it just found itself in too big a shadow to break out and find its own voice.

I really don’t know what to say to those of you who hold the original Ghostbusters close to your heart, but I do know what I can tell the rest of you: it may not be perfect, but the new Ghostbusters is worth your time, and worth evaluating on its own merits. It’s got some fantastic special effects, a lot of comedy, a performance by Thor himself (Chris Hemsworth) that needs to be seen to be believed, and a perfect pace for a summer evening. And, yes, in these dark days of 2016, this new Ghostbusters is just the perfect escape we all could use.

P.S. No spoilers here, but, if you do go, stay to the end of the credits.