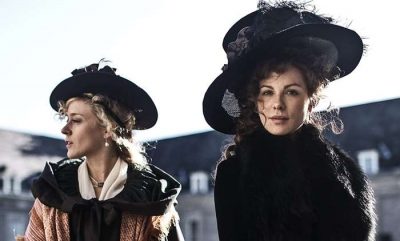 Before we allow ourselves to be swallowed whole by the overblown cacophony of big explosions, mind-bending visual effects, one-dimensional characters, simplistic stories and eye-rolling dialogue that seem to make up the majority of our summer movie season, let’s take a moment to revel in the beauty of language. You remember language—it’s that thing we used to find in books. You remember books—they’re those things we used to read before Twitter.

Well, someone who was really good at this thing called language was Jane Austen. You may know her from her many beloved screenplays, like Sense and Sensibility, Pride and Prejudice, Mansfield Park and Emma (and Emma’s more popular, if not looser, Hollywood interpretation, Clueless). Yes, this Miss Austen knew her way around the verbal playground—and knew how to spin a yarn or two in the process. One of the reasons her stories and novels have been adapted so many times in so many different ways is they are not only charming and warm but witty, smart and seductive. Well, as seductive as a 19th century English countryside can get (a smoldering Colin Firth as Mr. Darcy notwithstanding.)

The latest interpretation of the grand dame of English countryside romance literature’s prose is Love & Friendship, an utterly enjoyable, charming and language-laden bon bon upon which any lover of the English language can feast their ears. For there really isn’t anything new here, cinematically, or even thematically (seen one Austen, you’ve seen them all), but what makes Love & Friendship such a rare treat in this day and age is its total commitment to the words. Everything, even the gorgeous scenery, costumes and a Kate Beckinsale who looks NOT the worse for wear after all those Underworld movies, play second fiddle here to the words on the page, lovingly inspired by Austen’s novella, Lady Susan, but actually written by director/screenwriter Whit Stillman.

Stillman has such a grasp of the tone and texture of Austen’s language that it’s hard to believe Love & Friendship wasn’t actually written by Austen herself. From the very first scene, you get caught up in the frantic exchange between two characters and, from there, you’re in deep. Practically the entire movie is made up of one-on-one conversations, often while strolling through a garden or riding in a carriage. This is not your typical summer action movie. However, the dialogue, and the richness and cleverness of it, is so intoxicating, you find yourself drawn in and seduced by every single word.

There are many machinations in Love & Friendship. Promises of love, promises of friendship, manipulations upon manipulations, jealousies and betrayals, seductions and heartbreak. The actors, all of whom are solid and capable, serve the screenplay well, as does the entire production, which is lavish and beautiful. But, make no mistake about it, Love & Friendship is a movie only for those who seek out—and revel in—the way words, when put together in just the right way, can create dialogue (and, thusly, a story) that is seductive, cunning, playful, layered, and oh so Austen.