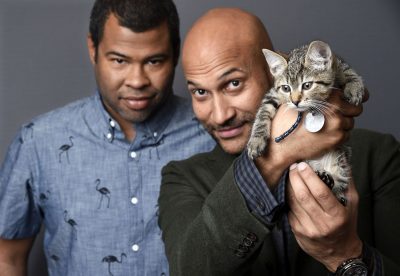 If you think the whole fish-out-of-water trope in movies has been done to death, you haven’t seen Keanu. Keegan-Michael Key and Jordan Peele, the Emmy-nominated comedy duo behind television’s Key & Peele show, have made their first feature film and it’s both funny and unique. I wouldn’t have expected anything else from them.

Keanu tells the story of two cousins, Clarence and Kell (played by Key and Peele), who live in suburban Los Angeles, far closer socially to Beverly Hills than to Compton, as these self-acknowledged “blerds” (black nerds) have mainstreamed themselves into society and are as far away from being “gangsta” as two black guys could be. But, when Kell finds that the local hardcore drug-dealing gang may have stolen his prized kitten, Keanu, he enlists Clarence to help him infiltrate the gang in order to get Keanu back. And, well, you can guess the rest.

And, because this is Key & Peele, the rest is both hilarious and charming and, at times, outrageously silly. The comedy comes, naturally, from the contrast between the violent, extreme and dark world they are trying to blend into and these two guys, who are as gangsta as Midwest librarians. And it works because of the hard work Key & Peele put into it, especially Key, who is, by far, the stronger of the two performers. Writers Peele and Alex Rubens (and director Peter Atencio) know the talents Key has because they give him the bigger scenes and the funniest bits and he rises to the occasion every time.

However, if it seems like I’m burying the lead here, I am. What really makes Keanu stand out from all the other comedies out there—and what got me to plunk down my money to see it on opening night—is its secret weapon: the kitten. Yes, no matter how funny or genius Jordan Peele or Keegan-Michael Key might be, and they could’ve written or performed the most Oscar-worthy performances in the history of film, it doesn’t matter because everything in this movie is overshadowed tenfold by the presence of one (or several, but don’t ruin the illusion) precious little grey tabby kitten who steals the show. They say never to share the stage (or screen) with an animal or a child, well, here’s proof.

But Keanu embraces the kitten. This movie finds a way to blend hardcore gang violence with a cute cat video. If you thought the juxtaposition of Juice Newton’s “Angel of the Morning” playing over a shootout during the opening credits of Deadpool was awesome, you really ain’t seen nuthin’ yet. This is classic comedy at its best and what Key & Peele do best. Without the cat, Keanu is still a funny, well-made comedy with plenty of good jokes and strong performances. But, sad to say, it would be just above average. But, WITH the kitten, Keanu is an entertaining, unique and fiendishly clever take on common tropes that will leave you laughing and “aww”ing at the same time. The world needs more Keanu. Wow, that’s the first time I’ve ever written that.