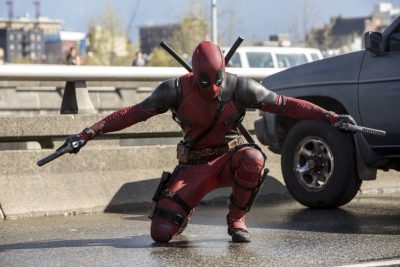 You’d think Deadpool would be a movie right up my alley. A superhero movie that actually makes fun of superhero movies. A movie that doesn’t take itself too seriously, that has fun with tropes and conventions of the genre, one that smartalecks its way through the (bare) plot, and zips along with a fast pace and stunning visuals. So what exactly is wrong with Deadpool? Well, if you don’t mind me quoting from another campy and over-the-top movie (one that I love), St. Elmo’s Fire: “there is the brink of insanity and then there is the abyss.”

Welcome to Deadpool: aka the abyss.

This movie puts me almost at a loss for words. First time director Tim Miller is best-known for being a visual effects artist and video game producer and you certainly know it by watching this movie, which looks and feels like one giant video game, complete with slow-mo action sequences, big-budget, explosive action sequences and a teenage lowbrow sensibility that makes Jackass look like a Lifetime movie. And that’s really where Deadpool separates itself and ultimately disappoints.

Even though it does spiral into just another shoot-em-up, blow-em-up, CGI explosion-fest by the end of the movie, I’ve gotten so numb to all of that in movies I almost don’t notice it anymore. Where Deadpool really had a chance to be different was in its tone—it really set out to be snarky and clever and be the exact opposite of the other superhero movies: NOT take itself seriously. The problem with that? It goes way too far. Deadpool not only doesn’t take itself seriously, it falls in love with its own jokes. It thinks it’s just the coolest, funniest, hippest, most outrageously original thing ever to be on a movie screen and, well, it’s not. Right off the bat, I can think of two movies that tried to do the same thing and worked much, much better: Charlie’s Angels (directed by McG) and Guardians of the Galaxy (directed by James Gunn). Both of those movies managed to blend self-awareness with comedy, snark and action to much, MUCH greater success than Deadpool does here. And those movies were much more fun too.

Director Miller does one thing right, which is casting Ryan Reynolds as the star. Reynolds is as charming as he can be, and he’s put all the work in to make himself look like a superhero, but neither Reynolds’ charm nor his abs can save a script that is one dick joke after another or a directorial vision that is Matrix-meets-Playstation.