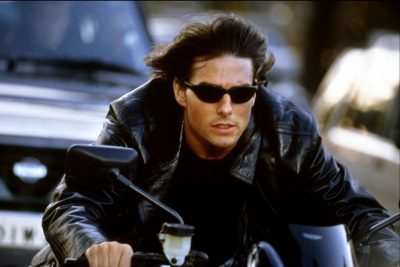 I think I’m one of the few people in America who actually liked the first Mission: Impossible. Sure, it had some improbable story twists, some incoherent plot points and an unbelievably unbelievable ending, but, still, it had an aura, an atmosphere and a style to it that made it appealing. I, for one, love that spy stuff, and so do a lot of other people, as attested by the phenomenal success of the James Bond franchise. So, naturally, I was looking forward to the next installment of what is turning out to be Tom Cruise’s pet franchise. I was looking forward to more gadgets, more stealth operations, more delicate stunts, and more great spy stuff.

What are the differences between Mission: Impossible and Mission: Impossible 2? It would be easier to ask what they have in common: Tom Cruise and the title. Ving Rhames is thrown in for good measure, but this installment has none of what made the first film so alluring and it has far too much other stuff.

OK, so I understand that Cruise wanted bigger and faster. So he hired action guru John Woo to direct. Cruise (who also co-produced) also wanted to avoid the convoluted-and-too-confusing backlash that hit the script of the first installment. So he hired veteran Hollywood screenwriter Robert Towne (Chinatown) to write it. Well, neither one worked, because they were in conflict. Woo is big, brassy and loud and Towne was trying to be quiet and subtle. Oops. Somewhere, caught in the middle, is a floundering film in search of a soul, in search of direction and in search of anything coming anywhere close to good.

First of all, let me alert you, fair reader, that Mission: Impossible 2 is a sexist film. Not that that’s a bad thing this time of year, or rare, but it is blatant, as blatant as I’ve seen in years. Near the beginning of the film, we are introduced to Thandie Newton’s character, a professional thief, who Cruise’s character is assigned to enlist for a mission. The sequence in which we meet her and she meets Cruise’s character Ethan Hunt, is well done, and entertaining. She is clever, ballsy and beautiful, a combination which reminded me of Michelle Yeoh in Tomorrow Never Dies, and I was eagerly anticipating a similar partnership between Cruise and Newton, the spy/thief team who would save the world.

Well, I couldn’t have been more wrong. I forgot for a moment that I was watching a John Woo film, and a woman isn’t allowed to have more than five lines in the entire piece. By the third scene Newton is in, she has stopped speaking altogether and is relegated, for the remainder of the film, to being the hapless heroine in distress, capable only of longing, helpless gazes at our hero.

But I can, reluctantly, even forgive this shameless testosterone torture, for I had no misconceptions about what I was walking into. But what I couldn’t stand was the utter lack of delicacy in this picture, the overabundance of bravado in place of sensitive operation. Woo is known for his lavish action sequences and incredibly choreographed fight sequences, but he is far from known for being delicate.

OK, so once I realized that my dream of seeing a spy movie disappeared and I accepted that I was just watching an action flick, I tried to settle in and enjoy the ride. I’ve always wondered how many scissor kicks to the head it takes before a man gets knocked out. Well, I would tell you, but I lost count. I lost count somewhere between the scissor kicks and the slo-mo Matrix rip-off moments and the screeching tires and rapid gunfire and flying doves…..I just got lost.

And don’t even get me started on the whole face-switching thing. Is this all John Woo knows how to do? And how convenient….I know I carry a rubber face of my enemy in my back pocket, ready to throw it on at a second’s notice so I can outwit the bad guy. In my book, this whole face-changing thing is not about clever spy stuff, it’s about a cheap way out of a sticky plot point and it gets really old.

I’m truly surprised Robert Towne even allowed his name on this piece. He should be embarrassed. I know if anyone finds out I paid $8.50 for this garbage, I’d be embarrassed.

My rating: * : read a book instead