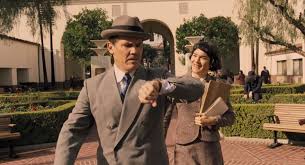 I refuse to just write off the new Coen brother movie Hail, Caesar! as a light-hearted ode to Hollywood in the ‘50s. That would be too simple. And not at all accurate. While it most certainly does play like a love letter to the Hollywood of old—the days when studios were dream factories and movies played out our every fantasy—it also plays an awful lot like a classic, well, Coen brothers movie. That is: there are times you can’t quite figure out exactly what it is. There are moments during Hail, Caesar! when the Coens (brothers Joel and Ethan, who share the producing, writing and directing duties) inject deep themes that have been explored in their previous movies, such as religion, philosophy, social justice, communism, crime, capitalism and class warfare, to make Hail, Caesar! a surprisingly meaning-packed soufflé of self-referentialism and thought-provoking charm candy. Then again, there are other moments that are so unbelievably silly and classic Raising Arizona Coen that I wondered if we were supposed to ponder anything at all.

Or maybe I’m overthinking all of it.

Here’s the bottom line of Hail, Caesar!: it is not a laugh-a-minute romp, despite how the trailer makes it look. Nor is it one of the Coens’ best. But it is a thoroughly pleasurable and extraordinarily well-crafted (and gorgeous) night out at the movies whose best moments are those that pay tribute to the classic nights out at the movies from Hollywood’s Golden Era: musicals, westerns, romances, even Esther Williams “aquamusicals” get the royal tribute treatment here. There is a plot, but, much like some other Coen movies where the plot is quite secondary to the characters, tone and atmosphere (see Big Lebowski, Barton Fink, Raising Arizona, etc), it is minor to the discussion of the film. The experience of Hail, Caesar! is what makes it worthwhile, and that is the nearly two hours of joyous filmmaking, wonderfully addictive characters and that perfectly bizarre (and dry) Coen wit that is unlike anything else anywhere in pop culture.

And, being the Coens, they have the ability to lure the best talent on the planet, and it is all on display here, as usual. Ralph Fiennes, who showed us last year in The Grand Budapest Hotel that his genius scale now includes a level for comedy, delivers yet another gem of a comedic performance here in a small but hilarious turn as a frustrated director trying to communicate with a green actor (played by newcomer Alden Ehrenreich, who nearly steals the movie from everyone). Channing Tatum continues to display his dizzying array of talents as he channels Gene Kelly in—by far—the best scene in the movie. George Clooney revisits his Coen goofiness of O Brother, Where Art Thou? and the brilliant Tilda Swinton is, well, brilliant as always. Even Scarlett Johansson, whom I’ve never been a fan of, is perfectly charming in her brief appearance.

Every Coen movie is made by the cast of colorful characters that inhabit it, and Hail, Caesar! is no different, but perhaps what makes this movie a bit different is the stable and grounded character at the heart of it. Josh Brolin plays studio head Eddie Mannix, who is faced with varying obstacles during one crazy day on the lot. Brolin, who is a solid and capable actor, plays Mannix with an understated weight, just enough to be dryly hilarious but never enough to be over-the-top or inauthentic. Brolin is the perfect center for Hail Caesar!: masculine, strong and straight, seemingly All-American and perfectly bland and almost colorless, his presence and calm gravitas allows the cast of colorful characters to swirl around him, his deadpan reaction shots sometimes providing the film’s funniest moments.

But this is what is perhaps the best thing about Hail, Caesar! It so easily could have sunk into being a parody or simply an over-the-top spoof of Hollywood, chock full of colorful characters and sight gags. But the Coens are both too smart and too good for that. Hail, Caesar! is so much more (and deeper) than parody, so much more than tribute and so much more than even comedy. It, like every Coen movie before it, offers legitimate worldviews, commentary and moments of depth that make you wonder what you’re even watching. And then something so absurd happens that you realize you can only be watching a Coen brothers movie. And life is good again.