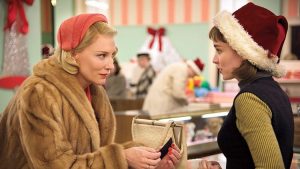 Sometimes, there’s nothing quite as satisfying as the slow burn. Director Todd Haynes’ latest movie, Carol, demonstrates the fine art of the build-up, the anticipation, the slow burn—the subtle, yet quietly intense lighting of a spark that takes its own sweet time to ignite, but, when it does, the resulting flame is glorious.

Written by Phyllis Nagy and based on the famous lesbian novel “The Price of Salt” by Patricia Highsmith, Carol is a sumptuously produced and flawlessly acted film that pulls you into its world, dramatic and passionate, longing and lonely, tragic and consuming. Set in 1950’s New York, Carol tells the story of department store clerk Therese Belivet, played by Rooney Mara, and unhappily-married (and soon-to-be-divorced) older woman, Carol Aird, played by Cate Blanchett, whose newly-formed friendship develops into a love affair. But nothing is easy or simple as Carol is fighting for custody of her child and Therese is trying to figure out what she wants to do with her life. Each woman is seeking something from the other but what they end up getting turns out to be nothing they expected.

For those of you who didn’t see The Girl with the Dragon Tattoo (the American version), this will most likely be your introduction to Rooney Mara. Welcome. Here you have an enigmatic, quiet, delicate flower of an actress who just might take over the world one day. Who else can share a movie with the magnificent Cate Blanchett and be stealing all the awards talk out from under her nose? Mara’s character in Carol may not be the showy role, but hers is the foundation. The story is told through Therese’s point-of-view, so, in essence, the audience is Therese. We have to believe Therese, we have to feel for her, we have to be her in order for the movie to work. Mara plays Therese as naïve and unsure, but also determined and self-assured. It is a fine line to walk, and she navigates it perfectly. As an actress, I’ve always noted her quiet power, which she really plays to her advantage here, playing Therese as a wallflower who blossoms before our eyes. And when she needs to deliver a line with force, it can rip your guts out.

Cate Blanchett, for her part, is all tiger and screen siren. She is believably irresistible—she is exactly the kind of character that someone would jump off a bridge for. We all have to fall in love with her and we do—how can we not? She manages to play that mysterious, sophisticated stranger who we all dream of being swept off our feet by with a perfect mix of sexiness and flawed vulnerability. It’s of course not surprising that Blanchett is so good—she’s always good—but she’s never been really sexy in a movie…until now. Blanchett saved her inner seductress for the perfect time and the perfect role. I dare you to not fall under her spell, no matter who you are.

Carol is undeniably about the two lead performances, and the chemistry between Mara and Blanchett also goes a long way to the success of the film, but the journey that is taken by the audience through the path of their relationship over the course of this movie is aided by the overall experience of this film, which is a stunning one. Director Haynes, composer Carter Burwell, cinematographer Edward Lachman, and costume designer Sandy Powell all contribute to create a gorgeous film which evokes not only the time and place, but the restrictive and judgmental social morays that shape the story and draw the themes.

Which brings me to that slow burn. Carol is a movie about temptation and awakening. It’s a seduction, but it’s also a coming to terms with self and a commentary on judgment. You don’t even see all the layers being stripped away until the end, when it knocks you out in a heartbreaking scene that reminds you why Blanchett has two Oscars on her mantle.

And yet, in the end, perhaps the best part about Carol is that it is not heartbreaking at all. Like its forbearers, Far From Heaven and Brokeback Mountain, Carol paints a familiar picture of forbidden love that can never be fully realized, but, happily unlike those films and others in the same genre, Carol features an ending that is decidedly not tragic, but is instead optimistic and hopeful. A nice change at a time when we could really use a movie that, for once, doesn’t plunge us into total despair.