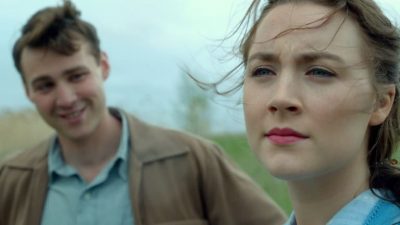 I so wanted to avoid the whole “we are a nation of immigrants” approach to my discussion of Brooklyn, the new film from director John Crowley, starring Saoirse Ronan, but I’ve realized it’s impossible. Brooklyn is a movie about America, more than any movie in a long time has been, in that it’s about the immigrant experience and there is just no dancing around the fact that immigrants are the fabric of this nation, and this story is a colorful thread that represents so much of who we all are and where so many of us come from.

All that being said, despite its charm, universal appeal and terrific, heart-tugging performance from Ronan, who makes the most of her first adult starring role, Brooklyn somehow still disappoints, as what begins as a portrait of courage and determination winds up being just another predictable Hollywood romance.

Screenwriter Nick Hornby (Wild), creates a strong female protagonist in Eilis (played by Ronan), who has the strength and fortitude to leave her native Ireland in the 1950’s to seek out a better life for herself in America. She works hard, goes to school and slowly finds her way, standing on her own and forging a new path for herself, despite her homesickness.

The first part of Brooklyn paints a glorious tale of the immigrant experience: the difficult decision to leave home, the even more difficult journey, the absorption of new culture and integration into a new society and the melding of old ways and new, exciting ones. All of these experiences and histories make this country what it is today, and Brooklyn captures so much of it in perfect little snapsnots, done with charm and effectiveness. Eilis gets over her homesickness, with the help of a boy, Tony, played by Emory Cohen, as they fall in love. However, when bad news comes from home, Eilis must return to Ireland and she becomes torn between staying and returning to New York.

Without going into any spoilerific detail, what disappointed me about Hornby’s screenplay (based on the novel by Colm Toibin), is how it lets down Eilis’s character in so many ways by pandering to the easiest and cheapest way of getting the audience to engage. Creating the character as a strong, independent woman, only to pander to our inherent desire to see her fall in love and, ultimately, root for her to make a choice between two lovers, appeals to our most base emotions and, while it may work to get us to connect on a deeper, more personal level to the character, it also goes a long way to making the movie much more average, something I would never have expected during the first hour of the film.

Even though I was somewhat disappointed by Brooklyn overall, it still is a remarkably charming and appealing movie—the perfect 18-to-80 holiday family movie. Saoirse Ronan is long overdue for a role and attention like this, and it is well-deserved. And it never hurts to be reminded of the rich and colorful fabric that makes this country what it is. Brooklyn may be just a place, but it represents us all.